Moon Jae-in stands for a portrait in Seoul, South Korea, on April 15, 2017.
Adam Ferguson for TIME

On May 9 South Korea will elect a new President, as tensions with dysfunctional neighbor North Korea reach fever pitch. On April 16, Pyongyang attempted another weapons test in its quest to develop a nuclear-armed ballistic missile capable of hitting the U.S. mainland. Though that launch failed, North Korean Vice Foreign Minister Han Song Ryol told the BBC this week that more tests would continue on a “weekly, monthly and yearly basis.”

U.S. President Donald Trump says Pyongyang has “gotta behave.” Following a visit to the Korean DMZ on Sunday, U.S. Vice President Mike Pence said, “North Korea would do well not to test [Trump’s] resolve or the strength of the armed forces of the United States in this region.” U.S. Secretary of State Rex Tillerson had previously said that a preemptive military strike remains “on the table.”

The South Korean presidential front-runner is Moon Jae-in, a civil-rights lawyer who was a former legislator and onetime presidential Chief of Staff. Moon lost narrowly in 2012 but currently leads a field of five candidates in which his nearest rival is the more conservative Ahn Cheol-soo, a tech entrepreneur. On April 15 TIME sat down with Moon, 64, to discuss how he would deal with North Korean Supreme Leader Kim Jong Un and avoid a full-scale nuclear war. TIME’s Zoher Abdoolcarim, Charlie Campbell and Stephen Kim talked with Moon through an interpreter.

Trump has said that the U.S. will go it alone on North Korea if Washington does not get cooperation from China. Meanwhile, the North Korean government has said that it will retaliate if attacked. Tensions are very high. Is a terrible war going to break out on the Korean Peninsula?
South Korea and the U.S. are aligned. The first thing that should be done is to stop the North’s further provocations. I don’t think the U.S. plans to make a preemptive strike against the North. Any decision by the U.S. should be made in close consultation with South Korea, its ally. If the U.S. makes a preemptive strike against the North, there is a chance of the North striking back against the South. If that happens, South Korea will suffer, not the U.S. But that will also cause damage to U.S. troops based in South Korea and to many American citizens living in South Korea. Human history shows that, even if not intended, an accidental clash can result in war.

North Korean officials and Chinese state media have indicated that Trump’s actions are essentially reckless and contributing to the tensions. Do you agree? What is your message to the leaders of the U.S. and China in terms of how to deal with North Korea?
If the North continues with its nuclear provocations, it’s natural that South Korea and the U.S. will impose stronger sanctions against North Korea. But we need deft crisis management skills to ensure that rising tensions do not lead to war. To North Korea, we must send an unequivocal message that their determination to strengthen their nuclear capability does not help them maintain their regime but jeopardizes it … To China, we must make it clear that if they fail to rein in the North, sanctions against the North will be stepped up and the deployment of [U.S. missile defense system] THAAD will be inevitable for us.

If you were elected President, what specific steps would you take to reduce tensions on the Korean Peninsula?
The ultimate goal is to get the North to the negotiating table to ensure the dismantlement of the nuclear weapons. So the first stage would be, while strengthening sanctions and pressure against the North, to bring them to the negotiating table. The second step is to have the North agree to a nuclear freeze, to discontinue its nuclear provocations and missile tests. And the last is dismantlement of the North’s nuclear-weapons program.

Over the years many tactics have been tried with North Korea, including dialogue, the six-party talks and sanctions. But nothing has stopped North Korea’s nuclear program. Is it even possible to persuade Pyongyang to stop developing nuclear weapons?
The containment strategy pursued by the two conservative administrations of [former South Korean Presidents] Lee Myung-bak and Park Geun-hye and the “strategic patience” of the Obama Administration were a complete failure. Things were different under the administrations of [earlier South Korean Presidents] Kim Dae-jung and Roh Moo-hyun. Then, there was significant progress in inter-Korean relations, without the fear of another war between the two Koreas. To dismantle the North’s nuclear-weapons program, the six-party talks, a multilateral framework, was put in place. We even made a comprehensive agreement between the North and the South: the Sept. 19 Joint Declaration referred to the full dismantlement of North Korean nuclear weapons, having a peace treaty, and even normalization [of relations] between the U.S. and the North. The North even blew up the cooling tower of its nuclear reactor. That all stopped after the Lee Myung-bak administration took office. I know the North’s nuclear capability is more advanced now, but the same step-by-step approach is still workable.

What is your sense of Kim Jong Un? Is he irrational, as some say? Do you think he would agree to talk?
Kim Jong Un is a very irrational and oppressive leader. But the same goes for his predecessors. The regime itself is irrational, and incomprehensible by international standards — it is a third-generation dictatorship. We face a daunting challenge.

You say that you want to negotiate with the regime and make them see reason. But you say the regime is irrational. Isn’t there a contradiction here?
Even if Kim is an irrational leader, we have to accept the reality that he rules North Korea. So we have to talk with him. If Kim wants the security of the North Korean system and regime, we have to convince him that nuclear dismantlement actually achieves those goals. The U.S. must make diplomatic efforts with the North, and demand that China apply pressure on North Korea.

If you are elected President, would you be willing to go to Pyongyang for a summit? And would you go to Washington to say to Trump: “Talk to the North Koreans”?
If elected, I will visit Washington shortly after taking office to discuss with President Trump how to get the North to fully dismantle its nuclear weapons program. I am willing to meet Kim Jong Un so long as that helps us resolve the North Korea nuclear issue. But I am not interested in having a meeting for the sake of having a meeting. I will meet him when there is a guarantee that there would be visible results such as freezing or dismantling the nuclear-weapons program … We can explore meetings between the U.S. and the North, and between the South and the North in parallel. We can resume dialogue, be they four-way talks or six-party talks. But, if elected President, I will not act unilaterally to have dialogue with the North without prior consultation with the U.S.

There is a new President in the White House who is very different from the last President, and who has been saying some aggressive things about North Korea. Do you think you could work with Trump?
President Trump occasionally makes aggressive pronouncements about the North, but I recall him once saying that he can talk with Kim Jong Un over a hamburger. President Trump is also critical of the previous policy of strategic patience of former U.S. Administrations, calling it a failure as it failed to change North Korea. I believe President Trump has a pragmatic view. In that sense, I believe we will be able to share more ideas, talk better, and reach agreements without difficulty.

So you don’t think North Korea will collapse?
The theory of the collapse of North Korea has been there for a long while, but it hasn’t turned out to be true. Even though the North is an irrational regime, I don’t think an early collapse is likely. If it does collapse in the near future, it will send an SOS to China, not to South Korea, and it is very likely that a pro-Chinese regime will take power [in Pyongyang]. That will make reunification more difficult to achieve, even impossible. Even if we can reunite the South and the North, the costs will be unbearable for us — far greater than those Germany had to bear [following post-Soviet reunification in 1990]. That is not good for Korea. We should take the step-by-step approach of economic cooperation, then economic integration and finally full reunification.

Your father [and mother were] born in what is now North Korea. Does that influence your feelings toward reunification? How important is reunification to you personally?
The North and South shared one language and one culture for thousands of years before they were divided only 70 years ago. Ultimately, we should reunite the North and the South, [we] are one people. My father fled from the North, hating communism. I myself hate the communist North Korean system. That doesn’t mean I should let the people in the North suffer under an oppressive regime. That is why we should take the path to reunification and pursue a liberal democracy in a united Korea. It has already been proven that a liberal democracy is far superior to the system in the North. South Korea is far more prosperous than the North — beyond comparison. That’s why I favor engagement with the North.

What does your mother tell you about the North and her hometown? Are her memories fond?
My mother is the only one [of her family] who fled to the South. All her relatives were in the North. Her parents passed away and most of her siblings are gone. My mother is 90 years old. Time is ticking. But her younger sister is still in the North. My mother’s last wish is to see her again.

The presidency of South Korea is one of the toughest jobs in the world. Are you tough enough for it?
I have government experience. I was a member of the National Security Council. I oversaw the overall preparation for the [2007] summit between the North and the South, and have experience dealing with North Korea. As a lawmaker, I was a member of the National Defense Committee. I am the best-prepared candidate to overcome our current crisis of security, diplomacy and the economy, and to rebuild our nation.

You’ve said that your favorite English word is dream. What is your dream?
To achieve a mature democracy, prosperity, human rights, and peace between the North and the South. 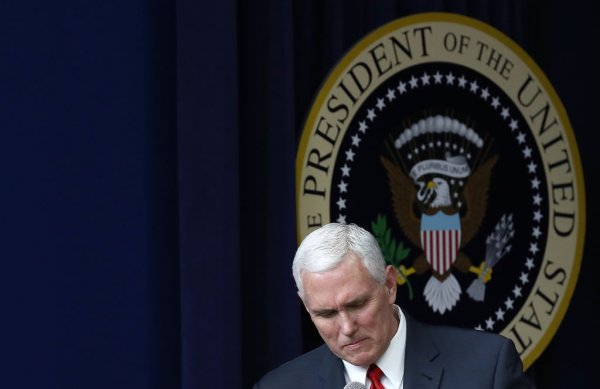 Pence Heads to Seoul Amid Rising Tensions
Next Up: Editor's Pick