Princess Diana (1961 - 1997) with her sons Prince William and Prince Harry at the V.E Day commemorations in Hyde Park, London, May 1995.
Rota/Pool/Getty Images
Ideas
By Patrick Jephson
Jephson served for eight years as Princess Diana's private secretary and is the author of Shadows of a Princess.

King Lear’s desperate plea just gets more poignant as we realize that even as he shouts the words into a stormy night sky, he already knows sweet heaven isn’t listening.

Shakespeare made the link between royalty and mental health four hundred years ago, and he probably wouldn’t be surprised to find it as strong as ever in 2017. In my own time in the Royal Household, the mental wellbeing of their future subjects was a cause taken up by both Prince Charles and Princess Diana. Now Prince Harry and his brother are following their parents’ lead.

It’s a brave step. The whole world watched them walking behind their mother’s coffin on its agonizingly long, slow journey from Kensington Palace to Westminster Abbey, past hundreds of thousands of silent mourners. Having lost my own mother at a similar age, I could at least begin to understand a version of what they were feeling. In good traditional British fashion, like Prince Harry, I never publicly showed my grief and for years denied its existence even to myself. Instead, I kept it a shackled prisoner deep in my insides from where, against all my powers of self-control, inevitably it one day suddenly burst into the open. From what he has publicly said about his own version of that experience, I’m glad to hear that Harry too felt it a moment of liberating catharsis.

By taking the decision to speak publicly about his own mental health, Prince Harry has taken risks and broken taboos in a way that would have warmed his mother’s heart. It was she who went furthest in lending royal prestige to victims of unfashionable afflictions and their carers; she who had the courage to speak publicly about her own demon, a lifelong struggle with an eating disorder. Her championing of causes such as AIDS, leprosy, addiction, domestic violence, homelessness as well as mental illness blazed the trail her younger son is now following.

Today it is easy to forget that in the late 1980s and early ’90s, such causes were deeply risky territory for any public figure. There lingered an almost medieval belief that illnesses like AIDS or schizophrenia were in some way deserved or at least self-inflicted. For Diana, the future queen, to stake her royal credibility on such issues provoked public controversy and — behind palace walls — bemusement bordering on disdain.

Some of the worst criticism came in the form of whispered insinuations from within the royal establishment, suggesting that Diana was on a virtue-signaling publicity mission to boost her ratings. Some even made the despicable and cowardly claim that in choosing such company she was demonstrating signs of her own mental fragility. A typical cartoon of the time showed Prince Charles talking to a favorite houseplant about his fears for his wife’s sanity.

As her advisor and chief of staff for eight years, I was all too aware of the reputational risks Diana ran as I organized her visits to leprosy clinics, AIDS units, drug centers, night shelters and women’s refuges, not to mention secure hospitals for the criminally insane. “Don’t Do It Di!” was one of the friendlier headlines that such unconventional royal work attracted. It made me laugh: telling Diana not to do something was a surefire way of making her all the more determined to go right ahead. Even as a toddler, Harry had inherited his full share of her contrariness — and then some.

So why did she do it? Sometimes I took the chance to ask her. “Don’t you see, Patrick?” she replied. “I do it because I’m one of them!”

I knew she didn’t mean that she thought she was insane — given the pressure she was under, she was one of the most resilient, self-aware and grounded people you could ever meet, and very funny, too. But I did recognize that she saw herself as an outsider, like so many of those she met whom society had labeled mad or deserving of exclusion for some other reason. Unable to find the right kind of support, encouragement or guidance from her husband or his family, she looked instead to her work for inspiration and direction.

And she found it — to a degree that much of the world, with her sons’ encouragement, is still remembering with thanks twenty years after her death. Her instinctive compassion began at home, especially with concern for her boys’ happiness in the strange, isolated roles providence had dealt them. Now through his own acquaintance with the purgatories of private loss and public criticism — to say nothing of combat — Harry emerges as a man reconciled with the burdens and temptations of royal status. Now we may hope he is free to be happy, as his mother would have wished above all else.

He is unlikely ever to be king of England, although he may now, to echo his mother, be king in many people’s hearts. Instead, it will be his brother who eventually inherits the throne and all the uncertainties that by then may be besetting it. How lucky then for William and his country that Harry has had the humility and sanity to discover the truth of a happier Shakespeare line: “This above all: to thine own self be true.”

Patrick Jephson was chosen by Princess Diana to be her equerry and only private secretary/chief of staff; he served the Princess for eight years (1988–’96). He is currently a consultant, journalist and broadcaster based in Washington, D.C. His account of her life, Shadows of a Princess, will be reissued in July by HarperCollins. 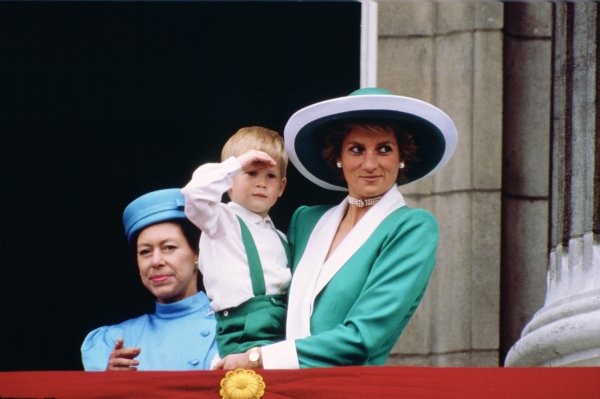 Why Prince Harry Is Talking About His Mother's Death
Next Up: Editor's Pick