Best known for his roles on Star Wars, Girls, and The Night Of, the British actor Ahmed also has plenty of musical tricks up his sleeve: he’s actually a rapper on the side, performing as one half of the duo Swet Shop Boys and as an independent MC. Corden, of course, is known for his own musical segments like Carpool Karaoke. But it turned out the two were fairly well-matched—until Ahmed really opened up with the fiery bars. The high-energy pair held nothing back.

“I know ruining a Star Wars is seen as unlawful / But here’s a Rogue One spoiler: in it he’s awful / Honestly it’s mean to say in Star Wars he stinks / He made me miss the days of Jar-Jar Binks,” Corden kicked off. But Ahmed rose to the occasion.

“Yeah, I did do Star Wars, I’ll bet that made you mad / too bad they weren’t trying to cast Jabba the Hutt’s dad,” he shot back, keeping with the theme.

They continued to trade insults on everything from Girls to Ahmed’s appearance on Jason Bourne to who’s better loved back in the U.K., finishing off with some mic-drop-worthy Coachella rhymes. Watch, above, to see who the crowd chose as the certain winner of the heated battle. 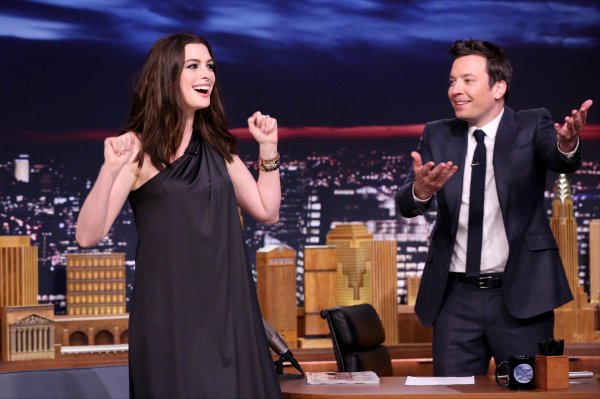 Anne Hathaway Sang the Most Awkward Google Translations Beautifully on Jimmy Fallon
Next Up: Editor's Pick