Former One Direction pop star Harry Styles is undergoing a career metamorphosis. Since the celebrated boy band went on indefinite hiatus, Styles has dabbled in acting and this month releases his solo debut album. “I wanted to step up. There were songs I wanted to write and record,” the 23-year-old explained in Rolling Stone’s May issue where he graces the cover. But just because Styles is on his own doesn’t mean he’s necessarily going to be catering to an older demographic. In fact, he’s praising One Direction’s base of teenage girls and their taste in music. “Young girls… they’re our future,” he said. The Internet, accordingly, went berserk.

“Who’s to say that young girls who like pop music – short for popular, right? – have worse musical taste than a 30-year-old hipster guy? That’s not up to you to say,” he said. Styles went on to explain that music is in a perpetual state of transformation: “There’s no goal posts. Young girls like the Beatles. You gonna tell me they’re not serious?”

He continued: “They’re our future. Our future doctors, lawyers, mothers, presidents, they kind of keep the world going.” Styles also praised young women’s honesty: “Teenage-girl fans – they don’t lie. If they like you, they’re there. They don’t act ‘too cool.’ They like you, and they tell you. Which is sick.”

In turn, many fans — both women and men — took to Twitter to profess their love for the shaggy-haired singer.

Read the rest of his Rolling Stone cover story here. 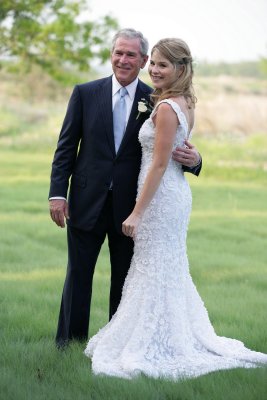 Jenna Bush Hager Says Her Father George W. Bush Is a ‘Feminist’
Next Up: Editor's Pick