5 Reasons Why Theresa May Wants a General Election Now

The next general election wasn’t due until 2020, but British Prime Minister Theresa May has urged Parliament to vote to go to the polls again in just six weeks. Lawmakers are set to vote on an early election on Wednesday, and approval is almost guaranteed with the opposition Labour Party backing the vote.

May said Tuesday she wanted the early vote to prevent opposition parties in Westminster from dividing the country over the government’s approach to the Brexit negotiations. ”I am not prepared to let them endanger the work of millions of working people,” she said. “It weakens the government’s negotiating position.”

But there are plenty of other good reasons why May wants an election now:

1. She currently holds a record polling lead over her rivals

For months now, opinion poll after opinion poll has said the same thing — Theresa May’s party would win a major landslide if the election was held tomorrow. Two polls over the weekend gave May’s Conservative Party a 21-point lead over the Labour Party, their largest rival. Just a week ago, another poll gave May herself a 37-point lead over Labour Party leader Jeremy Corbyn in terms of who would make the best Prime Minister (though Britons vote for a party, rather than an individual). With numbers like these, it’s likely May’s advisers were desperate for an early vote.

May’s historic lead in opinion polls isn’t just because she is especially popular; in fact, it’s because support for the Labour Party has fallen to record lows. A YouGov survey found fewer than one in four people in the U.K. backing Labour — an astonishing fall for a party which enjoyed over a decade in power under Tony Blair and then Gordon Brown.

The credit for that is largely due to Corbyn himself, a leftist lawmaker from London who commands a passionate following on the far left, but has little support from the general public. That YouGov poll found just 14% said he would make the best choice of Prime Minister. In particular, Corbyn’s muddled support for Brexit has alienated Labour voters who want a less severe break from the E.U.

3. She does not currently have a popular mandate

May won power not by a general election, but by emerging as the last woman standing in the dramatic Conservative leadership contest following the Brexit vote. As the Conservative Party won a general election victory in 2015, the party itself had a mandate until 2020. But May herself never faced the electorate — and as she has attempted to unite her country behind a Brexit position, she has been dogged by accusations that she does not represent a United Kingdom that never had a chance to vote for her. Now, it will.

Britain votes every five years thanks to a law passed in 2011. As May pointed out in her brief statement on Tuesday morning, the next general election is currently scheduled for May 2020 — only a year after Britain is scheduled to formally leave the European Union under the terms of Article 50 of the Lisbon Treaty. The vote would have hung over the Brexit negotiations, and possibly hamstrung negotiators as they attempted to finalize a deal. Now, May — or whoever wins the election — will be able to go into talks with a mandate for their approach.

5. She wants to keep the United Kingdom united

The general election also comes as the Scottish National Party (SNP) is agitating for a second independence referendum, based on the Scottish population’s vote against leaving the E.U. May — who does not want Scotland to leave the U.K. — might be hoping a general election will cut into the party’s extraordinary dominance in Scotland’s Westminster seats, and weaken the overall case for an independence vote. However, SNP leader Nicola Sturgeon has already identified this as a tactic and seems intent on fighting against it:

The question of what the general election will mean for Northern Ireland, which is currently gridlocked after the power-sharing agreement there collapsed, is less clear. If voting follows the pattern in the assembly elections, the Democratic Unionist Party stands to lose support to Sinn Fein. 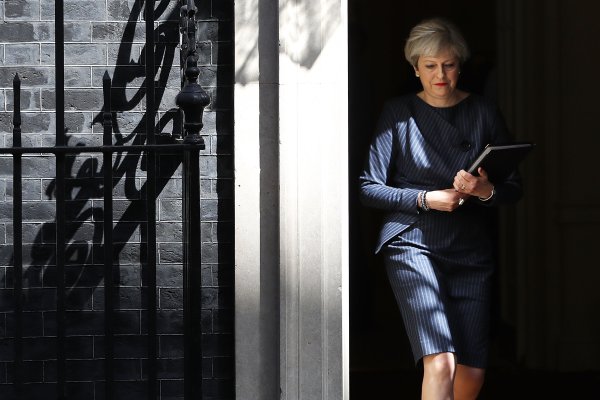 This Is Why Theresa May Can't Just Call a Snap Election Herself
Next Up: Editor's Pick