Prime Minister Theresa May makes a statement to the nation in Downing Street on April 18, 2017 in London, United Kingdom.
Dan Kitwood—Getty Images
By Kate Samuelson

Britain’s Prime Minister Theresa May shockingly announced Tuesday that she intends to hold a snap general election to “make a success of Brexit.” If the election is backed by two thirds of country’s Members of Parliament, it will go ahead on June 8 — roughly three years before the next election was due.

The announcement has stunned Westminster, particularly as it follows months of insisting by May’s ruling Conservative Party that an early general election would not be called. Here are seven times May or her representatives have said that the Prime Minister will not press for a premature vote:

As recently as March 20, a spokesperson for May told a Westminster media briefing that there was “no change in our position on an early general election,” adding “there isn’t going to be one… It is not going to happen,” the U.K.’s Press Association reported.

Despite polls giving the Conservative Party a double-digit lead over Labour at the time, which would have put May in an extremely strong position to call an election, the spokesperson said: “We have been clear that there isn’t going to be an early general election and the Prime Minister is getting on with delivering the will of the British people.”

Downing Street insisted that May did not want to call an early election in response to comments by former foreign secretary and Conservative Party leader William Hague, who urged her to scrap fixed-term parliaments to ease the waters when navigating Brexit. According to the Daily Telegraph, an anonymous Westminster source said: “It’s not going to happen. It’s not something she plans to do or wishes to do.”

After the High Court ruled that May needed to seek approval from British MPs before triggering Article 50 and starting the Brexit process, a spokesperson for the Prime Minister said she would appeal the decision, but reiterated that May did not intend to hold a general election before 2020.

In an interview with the U.K.’s Sunday Times newspaper, May said that it was “right that the next general election is in 2020” because “an early general election would introduce a note of instability for people.” She added that her decision wasn’t “about political games” but “about what is right for the country.”

In an interview on the BBC’s Andrew Marr Show, May insisted there would be no general election before 2020. “I’m not going to be calling a snap election,” she said, The Guardian reports. “I’ve been very clear that I think we need that period of time, that stability, to be able to deal with the issues that the country is facing and have that election in 2020.”

May’s spokesman, speaking to reporters ahead of the return of Parliament the following week, said there was “no need” for another general election following the one in May 2015.

Shortly after Britain voted to leave the European Union, May, the then-Home Secretary, launched her campaign for Conservative party leader. “There should be no general election until 2020,” she said. “There should be a normal autumn statement held in the normal way, at the normal time, and no emergency budget.” 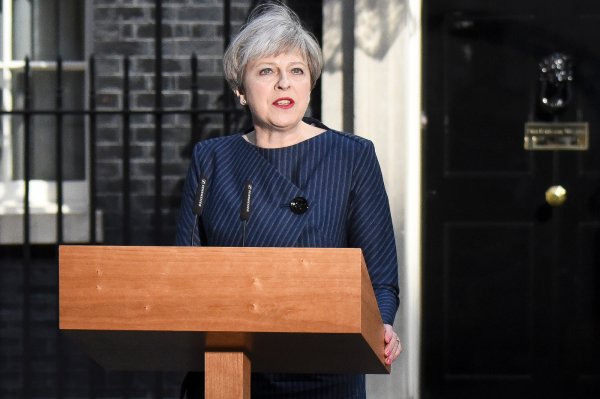 Theresa May Shocks Britain by Calling for Snap Election
Next Up: Editor's Pick