Tensions are on the rise once again in the India-controlled Kashmir Valley, where large crowds of protesters have taken to the streets following a violent clash between students and authorities at a college on Saturday.

More than 50 people were reportedly injured during what local media has described as a crackdown on students gathered at a school in the town of Pulwama, in the state’s south, over the weekend.

According to the Hindustan Times, the students began throwing stones at security forces in response to the installation of a military checkpoint near the campus. Security forces reportedly responded by launching tear gas and firing pellets at the students.

Students turned out by the hundreds in the capital Srinigar on Monday to protest the crackdown, with crowds later amassing in at least 10 towns throughout the state, according to the Indian Express. Some 60 protesters were reportedly injured Monday as police and paramilitary forces tried to break up the demonstrations, again using rubber bullets, water cannons and tear gas.

Several local media outlets reported that 3G and 4G providers have been ordered to temporarily cut service in the region to avoid the spread of videos and images that could exacerbate the violence.

The Indian government of Jammu and Kashmir, as the state is officially known, has also ordered the temporary closure of all schools and colleges throughout the valley, the Express reports. The fresh demonstrations, anti-Indian in nature, follow a sequence of recent skirmishes in the volatile state.

In early April, eight people were killed during clashes with police and paramilitary troops that broke out during a by-election. Last Friday, a viral video of a Kashmiri man tied to the front of a military vehicle — apparently used as a human shield to deter stone-pelting residents who oppose Indian militarization of the territory — sparked outrage and allegations of human rights abuses.

The Muslim-majority state of Jammu and Kashmir, wedged between India and Pakistan and claimed by both, has been the frequent site of violent unrest. Both countries claim sovereignty over the entire region, but only parts of it are ruled by each side. 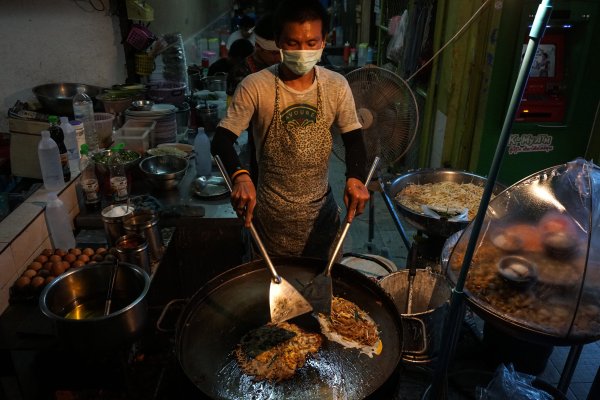 The World's Street Food Capital Is Banning Street Food
Next Up: Editor's Pick