Alex Jones, an American radio host, author and conspiracy theorist, addresses media and protesters in the protester encampment outside The Grove hotel, which is hosting the annual Bilderberg conference, on June 6, 2013 in Watford, England.
Oli Scarff—Getty Images
By Maya Rhodan

InfoWars’ Alex Jones’ Twitter bio declares that he is “Fighting for Freedom & Liberty on the Frontlines of Truth Journalism,” despite his penchant for pushing baseless conspiracy theories like “Pizzagate” and the idea that the Sandy Hook school shooting was a “hoax.”

But a lawyer for Jones recently said the conspiracy theorist is merely playing a character when he speaks via his InfoWars channels. “He’s playing a character,” attorney Randall Wilhite said during a recent pretrial hearing. “He is a performance artist.”

The Austin American-Statesman reports Jones is in the middle of a custody battle, and his ex-wife and mother of his three children, Kelly Jones, has said his fiery rants prove he is not a fit parent. “He’s not a stable person,” Kelly Jones has said, according to the Statesman. “He broadcasts from home. The children are there, watching him broadcast.”

A jury will soon weigh in on whether or not there is a separation between the alleged performance artist and the father of three.

Jones has become an unlikely force in the Donald Trump era. Among his millions of listeners is the President himself, who told Jones his “reputation is amazing” when he appeared on his show during the 2016 primary season.

A number of conspiracy theories peddled by the President, too, appear to have either stemmed from something Jones said or taken off because they were mentioned on the show, including the false notion that former President Barack Obama founded ISIS or that the election was “rigged.”

Jones has said he remains in regular contact with the President, and even recently turned down a trip to the Mar-A-Lago estate, the American-Statesman reports. A Texas judge will allow attorneys to play a selection of Jones’ InfoWars clips during the custody trial. 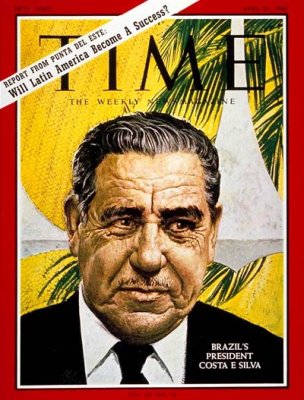 50 Years Ago This Week: Brazil's Place in a Changing World
Next Up: Editor's Pick