50 Years Ago This Week: The Liberal Civil War

The young and popular King of Greece, 26-year-old Constantine II, was featured on the cover of this issue — but the story on the inside revealed that he was just one figure in a complicated story of political upheaval in the birthplace of democracy.

In the dead of night, Greece’s army had shut the country’s borders and taken into custody a wide range of politicians from a number of different ideological groups. The reason for the sudden coup was that the army, which was loyal to the King, perceived that his opponents would prove victorious in upcoming parliamentary elections.

Despite the coup being taken in his name, the King didn’t agree with it. “Yet the palace coup that had occurred without the palace’s consent offered him a cruel choice: either to fight the coup openly and risk being toppled from his throne or go along reluctantly in the hope of being able to influence the military later,” TIME noted. “For the time being, he chose the latter course.”

The question facing Greece and the world now was whether Constantine could manage to nudge the military — and the military-influenced new government — toward moderation. Thus far he had not. (The eventual answer? Though it would take years for the consequences of the coup to play out, Constantine II would be the last King of Greece.)

Left vs. Liberal: This week’s TIME essay may interest today’s readers more than the goings-on in Greece. It’s all about “the new radicals,” characterized as a small group of “creatures of conscience” who had had an outsized impact on the national conversation with their attacks on “the quality of American life and the direction of U.S. foreign policy”:

TIME’s take on the movement doesn’t exactly read as objective — even as it concedes the influence of the New Left, it belittles the very idea of such a movement — but it’s a fascinating read in light of divisions on the left of American politics that were highlighted by the Sanders-vs.-Clinton narratives of the 2016 election. With its focus on the 1960s divide between the Left and establishment liberals, the essay examines many disputes that are still relevant 50 years later.

A global problem: Though American readers may think of the Civil Rights Movement as a particularly American phenomenon — and certainly the history of race in the U.S. is unique — this world-news report is an important reminder that racism is and was an issue around the world. Britain’s Parliament had, over the course of a decade, tossed out proposed anti-discrimination laws at what appeared to be an average rate of one a year.

Stones on tour: A report on the latest three-week European tour by the Rolling Stones includes this choice quote from their manager: “Pop music is sex and you have to hit them in the face with it.”

Great vintage ad: If by “great” you mean that you’ll learn something from it, check out this ad from the early credit-card company Carte Blanche, touting their “hers” card — a pink, discounted card designed for members’ wives. Remember, this was nearly a decade before the Equal Credit Opportunity Act, and married American women could have expected to have to rely on their husbands’ credit rather than establishing their own.

Coming up next week: Pitching Congress on the war 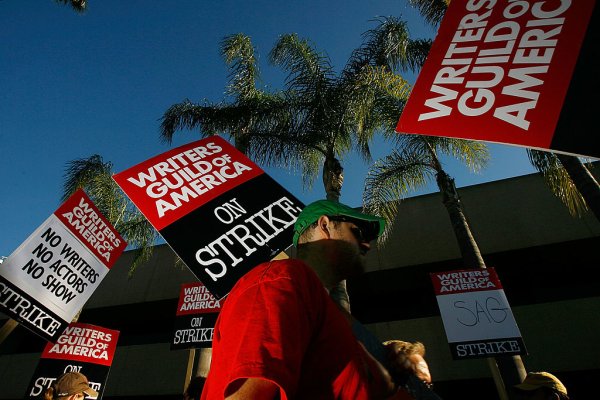 What to Know About the Threatened Hollywood Writers' Strike
Next Up: Editor's Pick