Searching for the Soldier Who Saved Ernest Hemingway's Life

Along the Piave River in northern Italy stands a memorial near where Ernest Hemingway almost lost his life in the closing months of World War I. “On this levee,” the inscription reads in Italian, “Ernest Hemingway, American Red Cross volunteer, was wounded the night of July 8, 1918.” The moment is so central to the author’s life that in 2014 the Ernest Hemingway Society brought a group of its members to the spot during its biennial international conference in Venice, Italy.

What is missing from the memorial, however, offers a lesson greater than that of an insight into Hemingway’s life. Absent from the marker is any mention of the Italian soldier whose death that night ensured the life of one of the 20th century’s most important authors. In short, had the soldier not been where he was, there would be no Sun Also Rises, A Farewell to Arms, For Whom the Bell Tools, nor The Old Man and the Sea.

That this soldier is left off the monument and the pages of history is a cold reminder of history’s cruelty. The recording of deaths is hardly a democratic matter. The less accomplished lives are often forgotten even when they change history.

The unremembered soldier was one of many young Italian men conscripted and crammed into trenches along the banks of the Piave River in July 1918. Holding back Austrian forces had come at great price. The Italians suffered more than 600,000 casualties. They greatly welcomed the presence of Red Cross volunteers who brought cigarettes, chocolates, and coffee.

Hemingway, who had come to Italy as an 18-year-old Red Cross volunteer ambulance driver, requested that he be assigned to ride a bicycle to the front trenches with panniers full of chocolates and cigarettes. On the night of July 8, 1918 Hemingway took his supply from the bike’s basket and stepped down into a trench that ran in a serpentine path along the Piave. As he handed out his bounty to the soldiers, he could make out in the distance the sound of mortar fire coming from the enemy’s line. Filled with explosives and metal shards, mortars travel in a high arc and descend vertically into the trenches, whose walls channel the detonation into a deadly affair.

When one of the Austrian mortars fell into the trench, Hemingway saw the flash first and then heard the roar that followed. The heat was intense, the ground seethed upward, wood beams splintered, and the men were tossed about like rag dolls. The nameless Italian soldier who stood close to the detonation point was dead. His body had taken the brunt of the blast and shielded Hemingway, who now lay unconscious, covered in dirt and debris. He sustained hundreds of shrapnel wounds and spent six months recuperating in the Red Cross hospital in Milan.

When I researched the incident for my book The Ambulance Drivers: Hemingway, Dos Passos, and a Friendship Made and Lost in War, I presumed that some scholar by now would have identified the dead soldier’s name. To my surprise no one seems to have been interested in pursuing this line of research. None of Hemingway’s biographers lament the absence of a name.

The records are certainly a challenge to anyone who might want to find the name of the soldier who took Hemingway’s mortar. None of the contemporaneous sources, such as the citation of the Italian Military Valor award given to Hemingway for courage and self-sacrifice, note the dead soldier’s name. Sometimes they don’t even mention his death. As a result this young man joined the many anonymous figures of history labeled as “an Irish maid,” or a “French soldier,” or “steelworker,” or in this case, an “Italian soldier.”

But not including a name in a combat story is like leaving a soldier behind. To be nameless is to be forgotten. The quest for naming dead soldiers was so strong after the Great War that worry over unidentified corpses prompted the U.S. Congress to create a tomb for an unknown soldier. The nation has kept entombing representative unknown soldiers up to the Vietnam War. That corpse, however, was later identified using DNA testing and now that crypt remains empty.

“Every man’s life ends the same way,” Hemingway once told his friend Aaron Hotchner, “and it is only the details of how he lived and how he died that distinguishes one man from another.”

When the name the name of the dead Italian soldier is added to the memorial along the Piave River, he too will have the distinction he deserves.

James McGrath Morris is the author of The Ambulance Drivers: Hemingway, Dos Passos, and a Friendship Made and Lost in War (March 2017). He has started a project to identify the Italian soldier discussed in this article. 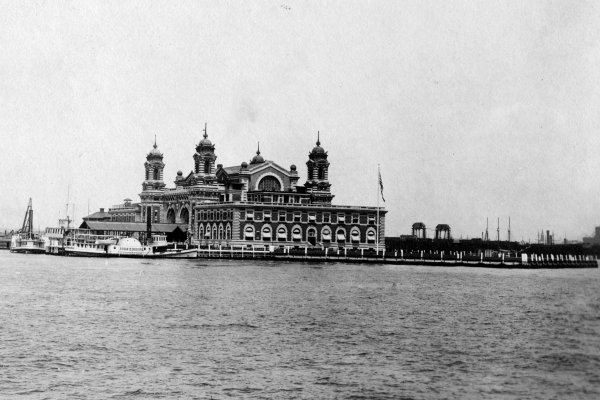 Ellis Island's Busiest Day Ever Was 110 Years Ago. Here's Why
Next Up: Editor's Pick