The Girls Finale Felt Like the Best Kind of Series Ending

Girls, which ended its run Sunday night on HBO, was a vehicle for one blazingly assured character, Hannah Horvath (played by show creator Lena Dunham). And, refreshingly enough, it returned in its final moments to the elements that made it work (when it did): The contours and spikes of Hannah’s personality.

“Latching,” the show’s final episode, focused on three relationships, two of which date back to the show’s very beginning. Hannah and Marnie (Allison Williams) are raising Hannah’s young son Grover together in an upstate home that feels less like a secluded idyll and more like an abandoned barn on The Walking Dead. You can hide from your problems for a while, but the menace you’re running from will eventually creep in. The pair needle each other in the horrible way only the best of friends can before Hannah shuts down, convinced that she is failing to bond with her son after struggling to breastfeed. She is visited, later in the episode, by her mother (Becky Ann Baker, making the most of her final moments).

The story is simple enough, in the way that the best Girls episodes could be, piling on complications steadily and insistently and then stripping them all away in one unexpected moment. Hannah suddenly comes to understand she can raise a child only after she encounters a pantless runaway teen. Her first instinct is to protect her, and then, as she realizes the girl is running away to avoid doing homework, to set her straight.

MORE Let’s Talk About That Girls Episode on Sexual Harassment

This is the satisfying culmination of a nearly season-long guessing game as to why, exactly, Hannah was having her baby. There was the glaring fact of her Hannah-ness: A character as seemingly unprepared for motherhood in every regard as she would, on many other shows (and in many other cases) not have gone ahead with the pregnancy, as various characters pointed out. And then there was the question of how Girls was spending its time. Its last few hours with the audience were spent on stories that seemed at first radically disjointed from the tone of what had come before — the lesson Hannah learned seemed to follow almost from nothing, as she’d had her child, off camera, only a bit earlier in the episode.

But Girls was always a show of wild dislocation. In terms of plot, it raced past exposition and skittered between plot points gleefully, refusing to commit to a narrative throughline or, at times, a clear sense of how well every character knew every other one. Hannah went to graduate school and dropped out, picked up and dropped lover Adam several times over, had a book deal until she didn’t, was open to experience until she wasn’t. She was selfish and proud of it, an empowering but dark combination. This approach to plotting, with Hannah in particular, worked well. And she was written carefully enough, with infinitesimal growth countered by frustrating, recognizable traits (that she was an aspiring writer who was basically uninterested in the experiences of anyone besides herself was a feature of the show, not a bug), that she could carry the show through odd flights of fancy, and make them seem like the only decision the show could have made even as they were ten minutes away from being reversed and forgotten about.

But whenever she left the screen, things got more and more gnarled. The decision to elevate Ray (Alex Karpovsky) and Elijah (Andrew Rannells), two smaller characters written more as types than as people, to major figures meant to carry both laugh lines and plot edged up to the catastrophic; the union of Adam (Adam Driver) and Jessa (Jemima Kirke) felt like a show admitting that it no longer quite knew what to do with the players it had put on the board early on. Shoshanna (Zosia Mamet), basically written out of the show in its final season and correctly declaring she was no longer Hannah’s friend last week, probably should never have been part of the main cast at all.

Girls quibbles — everyone has them, and they’ve been for a part of the experience for six years, as the show and the New York media scene it rubs up against create sparks. (It’s probably fairer to the show, which will bloom in some ways and diminish in others when future viewers watch it without weekly recaps, to leave it at that.) But the show’s final moments were hard to contest — and had moved on to an entirely different story besides. It’s not quite right to suggest that maternal love has forced Hannah to grow up — it’s, as Baker points out, the fact that it’s her first decision that can’t be reversed. The episode was carried across with less vigor than it usually exhibits, pointedly so, as though the absence of an escape hatch had fogged Hannah’s mind and the world around her. After Hannah gives the teen she meets her pants (long, Girls-y story), she’s left only with an American Apparel-style sweatshirt as she’s escorted home by a cop. The sweatshirt, and the freedom Hannah feels around partial nudity, is a throwback to early seasons, but this moment has a glum tone. The cop encounter would even a season ago have been a bit of an exploit. Here, it felt like something to be endured, and then left behind. After all, Hannah has created a situation, far from the places she once thought she’d find fame, where it’s possible to be miserable or to happy, if she lets herself, nourished by one old relationship and one new one. Then, in the show’s final moments, connecting to her child by some alchemy, she begins to get herself there.

It’s not, in a literal sense, the story the show set out to tell. But the show, having expanded, in ways good and bad, beyond its initial ambitions (constrained as they were by Hannah’s ramen budget and penned in by what was accessible on Brooklyn’s G train) could accommodate pretty much anything. This story felt like the best kind of series ending — one that allowed for the possibility that the show could continue, and become even more interesting, off the air. Girls was one of the single most exciting shows of the decade, making and unmaking mistakes with brio and audacity to spare; even when I didn’t love it, I wouldn’t dream of missing an episode. One is left with a familiar finale feeling, sadness that no one will see it grow up into the show it was in its final moments — a sharp, winnowed-down, focused character study. Hannah Horvath, one of the decade’s great characters, has always felt real, but she is starting to feel like a person. 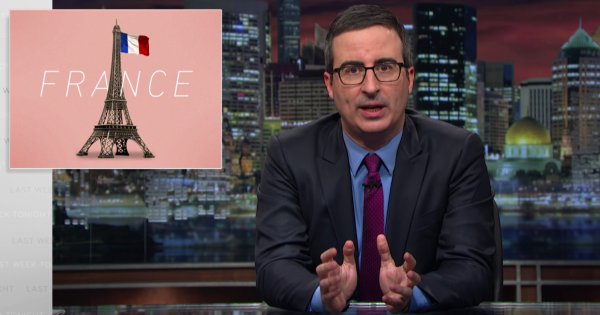 John Oliver Warns French Voters Not to Elect Another Donald Trump
Next Up: Editor's Pick