When Allan Lichtman correctly predicted the widely unexpected outcome of the 2016 presidential election, he received a personal note of congratulations from Donald Trump. Months later, the President will soon receive a copy of a new book outlining Lichtman’s next big prediction: impeachment.

“Throughout his career, Trump has avoided accountability,” Lichtman told TIME on Friday. “As president, though, you cannot walk away from accountability. You can’t declare bankruptcy, you can’t just abandon a deal. And the ultimate accountability is impeachment.”

Lichtman, an American University history professor who has used a set of keys to correctly predict every presidential election since 1982, gained attention last year when he predicted that Trump would win the election and then be impeached.

His new book, The Case for Impeachment, outlines eight possible reasons to impeach Trump, including his business-related conflicts of interest, his team’s connections to Russia and his involvement in previous legal disputes, such as lawsuits against Trump University. In his “most edgy” argument, Lichtman says Trump could be impeached for a “crime against humanity” based on his refusal to take action on climate change.

“There are so many bases on which Trump can be impeached,” Lichtman said. “That’s one way in which he is more vulnerable to impeachment than any other figure who has been elected for the first time to the presidency of the United States.”

The book, which will be released Tuesday, draws comparisons between Trump and the two U.S. presidents who have been impeached — Andrew Johnson in 1868 and Bill Clinton in 1998 — as well as Richard Nixon, who avoided inevitable impeachment when he resigned. Johnson and Clinton were both impeached by the House of Representatives but acquitted in the Senate.

“What might distinguish a Trump impeachment from that of Clinton and Johnson is that the transgressions could be more Nixonian — that is, more serious, more threatening to our constitutional order, our liberties, our freedoms and our national security,” Lichtman said.

But impeachment is a difficult process, and the act of actually removing a president from office is even harder. That’s especially true when the president’s own party has control of Congress — as Republicans do now. But Lichtman believes enough Republicans would support impeachment if any concrete evidence surfaced to show Trump’s campaign colluded with Russia to interfere in the election.

“I think the Russian connection would be the most likely source of impeachment,” Lichtman said. “There sure is a lot of smoke. And my own suspicion is there’s some kind of fire that’s producing this smoke. Whether it’s serious enough to warrant impeachment, we don’t know yet.”

“If the investigations do turn up some serious wrongdoing, I think even Republicans in Congress are not going to overlook it,” Lichtman added, while acknowledging “it’s a steep hill to climb.”

While making the case for impeachment, Lichtman’s book also gives Trump a “blueprint for surviving as president” that includes fully divesting from his business interests, supporting measures to prevent climate change, hiring a fact-checker and firing chief strategist Steve Bannon.

“I hope he reads this book, and I hope he does change,” Lichtman said. “I am rooting for Trump to some extent because I am a believer in American democracy, and I would much rather see our democracy cherished and protected than see President Trump being removed.” 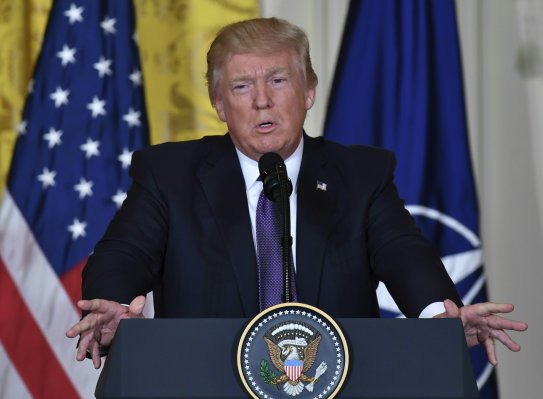 Some Women Who Backed President Trump May Be Having Second Thoughts
Next Up: Editor's Pick