Tracee Ellis Ross: ‘As a Black Woman, My Beingness Is a Form of Activism’

Tracee Ellis Ross is always dishing out wise words and her most recent interview is no different.

Sitting down with Good Housekeeping, the Black-ish star talked about her mom, Diana Ross, womanhood, and why her role on the ABC hit show is so significant.

Ross opens up to the magazine about finding meaning in her life and the choices women have today, explaining that today’s generation of women have the choice to live however they want. “I feel that to a certain extent, we are the first generation of choice for women, who have had the opportunity to actually choose the lives they want to live…. The cultural expectation for women that they are meant to be mothers and married and that that is almost what makes their lives valid creates a scenario that I push up against in general. There’s many places where that happens in our culture that I think are very limiting for women in terms of finding meaning in their own lives.”

The actress gushes about her mother, who she praises for working so hard. “I’ve never heard her complain. She was busy going to the supermarket, waking us up for school, sitting with us during dinner, recording while we were sleeping, never leaving for longer than a week so she wouldn’t be away from us. Whether she was about to go onstage or busy having a meeting, she never responded with ‘Not now, I don’t have time.'”

Ross also dishes on the importance of her role as Rainbow Johnson on Black-ish, remarking on the shows content and title, adding, “The fact that I am on a show called Black-ish, that I’m playing a woman who is both a wife and a doctor, a mother and a person, a partner and an individual, and that I am playing a joyful black woman on television who is not just surviving but thriving is by definition a form of activism.” 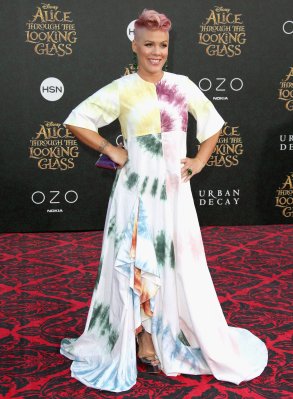 Pink Shares Breastfeeding Photo While Hiking With Son
Next Up: Editor's Pick