Abraham Lincoln Was Shot on Good Friday. Some Thought It Was Fate

Thomas Nast's 'Palm Sunday' from Harper’s Weekly Magazine, May 20, 1865
Courtesy of The Museum of Fine Arts, Houston: gift of Dr. Mavis P. and Mary Wilson, Kelsey
By Olivia B. Waxman

The calendar dates for Easter and its accompanying holy week changes every year but, by coincidence, those dates in 2017 may be familiar ones to history buffs: this year’s calendar dates for events like Palm Sunday and Good Friday are the same as they were in 1865, a year on which the significance of those dates was political, not just religious.

As the Civil War drew to its end, Confederate General Lee surrendered to Union General Ulysses S. Grant on April 9, 1865 — Palm Sunday — near Appomattox Court House. Then, four days later, on April 14 — Good Friday — President Abraham Lincoln was shot by John Wilkes Booth at Ford’s Theatre. He would die the next day.

Thomas Nast, the most famous political cartoonist of the period, commemorated the coincidence with an illustration pairing an image of Christ entering Jerusalem, the event that is commemorated every Palm Sunday, with an image of Lee surrendering to Grant at Appomattox. The illustration appeared in Harper’s Weekly.

“This is an age of intense evangelical enthusiasm, when many Americans viewed the war as a fulfillment of biblical prophecy,” says Maurice Isserman, professor of American history at Hamilton College. The most famous expression of this sentiment is poet Julia Ward Howe’s “Battle Hymn of the Republic,” which frames the war as potentially having an impact on the second coming, with the lines “Mine eyes have seen the glory of the coming of the Lord” and “as He died to make men holy, let us die to make men free.”

Abraham Lincoln himself also framed the war as divinely influenced, for example when he painted the conflict as God’s way of punishing the North and South for the institution of slavery in his second inaugural address: “Yet, if God wills that it continue, until all the wealth piled by the bond-man’s two hundred and fifty years of unrequited toil shall be sunk, and until every drop of blood drawn with the lash, shall be paid by another drawn with the sword, as was said three thousand years ago, so still it must be said ‘the judgments of the Lord, are true and righteous altogether.'”

And so, when Lincoln died from a bullet shot on Good Friday, the day that commemorates the crucifixion, it was no surprise that many evangelical Christians of the day drew the connection between the Biblical event and the contemporary assassination.

As Isserman puts it, “To have Lincoln, at the moment of triumph, be assassinated, be martyred for the cause of the union—many people at the time thought this was all a sign of the divine ordering of the events of the Civil War period.” 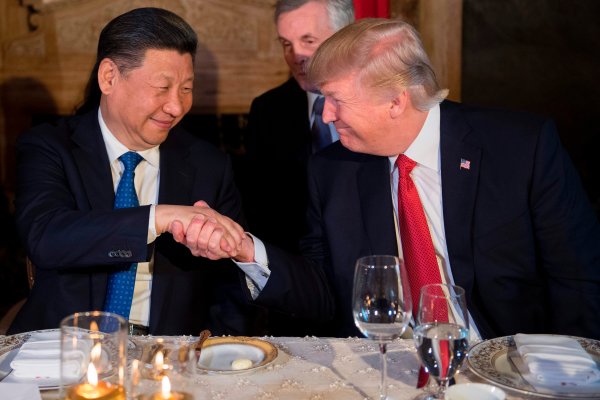 The Internet Had Some Thoughts on President Trump's Chocolate Cake Conversation
Next Up: Editor's Pick