Don Rickles is seen in his role as C.P.O. Otto Sharkey on Nov. 19, 1971.
Herb Ball—NBC/Getty Images
Ideas
By Patton Oswalt

The butt of every Don Rickles insult–whether it was initially aimed at a “black,” a “Polack,” a “Jew,” a “gypsy,” “elderly,” “gay” or “Martian”–was Rickles himself. A lot of the words I listed are “problematic” or “insensitive.” They’re crude and belong to an era when things were easy for a small slice of a small slice of the American public. The casual racism tossed off as punch lines and the exclusion disguised as insight can be wince-inducing.

Don Rickles was above and beyond it all–all of it, the incorrectness of yesterday as well as today’s hand-wringing about it. Don wasn’t making fun of “the blacks”–he was making fun of the sweaty lout who would place African Americans in such a childish category. Whether his audience was “laughing for the right reasons” wasn’t his concern. If the audience was too stupid to see that Don was making fun of racism by personifying the most desperate aspects of racism? Then they were part of the joke too.

Sometimes the things Don said weren’t even jokes–they weren’t even nonsense. They were bursts of half worked-out id. The last time I saw him was when John Lasseter got his star on the Hollywood Walk of Fame a few years ago. Don grimaced and addressed Lasseter and the other celebrities in the crowd: “I see I’m the biggest name here.” It was hilarious. And it was true. Rude, but true.

Oswalt is a comedian, writer and actor 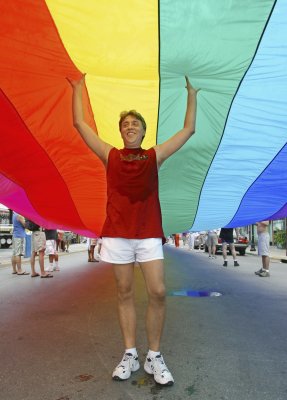 Gilbert Baker, Who Designed the Rainbow LGBTQ Pride Flag
Next Up: Editor's Pick