Star Wars fangirls have always believed in the Force, but now the Force believes in them.

A new storytelling series called Forces of Destiny aims to expand the galactic saga’s audience by highlighting its female heroes in eight new 2-D animated shorts. Those will debut on Disney YouTube in July, then be packaged with eight others in the fall for a pair of TV specials airing on the Disney Channel.

While they’ll be full of familiar characters and creatures, the central figures are Princess Leia from the original trilogy era, Padmé Amidala from the prequels, Rey from The Force Awakens, Rogue One’s Jyn Erso, and a trio from the animated Rebels series: the Mandalorian warrior Sabine Wren, Force-sensitive Jedi badass Ahsoka Tano, and the avocado-hued Twi’lek pilot Hera Syndulla.

In some cases, multiple heroines will appear in adventures with each other, even though some of them have been separated by different timelines – but it’s all official canon. “One of the opportunities here was to tell the stories in between the larger moments and imagine some of the ways our characters have crossed,” says Carrie Beck, an executive producer of the shorts and a member of the Lucasfilm story group braintrust. “It’s all part of the larger swath of storytelling.”

More will be revealed this Friday at the annual Star Wars Celebration fan gathering, but Lucasfilm gave EW an early look at what’s on the horizon.

THE TOOLS, THE TALENT

Each of the Forces of Destiny shorts are about three minutes long, and they were penned by Jennifer Muro, a writer known for DC’s Justice League Action, and directed by Brad Rau, who has helmed episodes of the animated Rebels series on Disney XD. Dave Filoni, executive producer of Rebels, also helped create the new storylines.

Other sci-fi/fantasy franchises have created special stories to attract female fans, like DC Superhero Girls, which rounded up heroes and villains into a high school. Rather than putting its heroines into a new environment, like a galactic classroom or summer camp, Lucasfilm preferred to keep the characters within the same universe as the movies, TV shows, novels, and comics.

Many of the original actresses will be voicing their characters. Daisy Ridley is playing desert scavenger Rey in stories set within the arc of The Force Awakens(sorry, no flash-forwards to The Last Jedi or Episode IX, and no flashbacks to illuminate her mysterious past,) and Felicity Jones will resurrect Jyn Erso for adventures that pre-date the climax of Rogue One. (Obviously.)

From Rebels, Tiya Sircar will voice heroic bounty hunter Sabine Wren, Ashley Eckstein will return as Ahsoka Tano, a character she has been playing since the earlier Clone Wars animated series, and Vanessa Marshall will bring her flygirl swagger from the show to Hera Syndulla.

With Carrie Fisher sadly gone, Princess Leia will be voiced in the shorts by Shelby Young, and although Natalie Portman won’t be playing the role of Padmé Amidala, she’ll be voiced by Catherine Taber, who played her in The Clone Wars.

One other towering female presence from Star Wars will play a part in the shorts: Lupita Nyong’o will narrate the shorts as her little orange alien sage Maz Kanata.

One Forces of Destiny story involves Rey battling the thieving Jakku scavenger Teedo to protect BB-8 while on their way to Niima Outpost for their fateful encounter with Finn. Another involves a battle with the nightwatcher worm, a creature with glowing eyes who was seen only briefly in The Force Awakens, lifting its head out of the sand. “He eats junk on Jakku and has an appetite for BB-8,” Beck says.

Another short takes place aboard the Millennium Falcon with Han Solo, Chewbacca, and Finn as Rey tries to disarm an explosive tracking device hidden aboard the craft by Unkar Plutt. “What we love about Rey is her mechanical skills, and she knows this ship as well as our other heroes,” Beck says.

A Princess Leia short set just before the battle of Hoth was literally inspired by a deleted scene from The Empire Strikes Back, in which she, C-3PO, R2-D2, and Chewbacca face down a ferocious Wampa who’s trapped inside the Rebel ice base. “Leia saves the day and rescues Chewie, so we get to see her leadership in play,” Beck says.

Rebels will blend with the movies in Forces of Destiny as Sabine and disgruntled droid Chopper inhabit the Yavin 4 Rebel base featured in Rogue One and the original 1977 Star Wars. One of her stories involves Ketsu Onyo, an old bounty hunter friend. “She’s not yet convinced the Rebel life is for her,” Beck says. She has a change of heart when they make a discovery while on a mission to steal cargo and food to keep the Alliance supplied.

Perhaps most intriguing to movie fans will be the story set on the Ewok moon of Endor from Return of the Jedi. Although plot details are under wraps, Hera Syndulla from Rebels and Princess Leia team up for an adventure with Han Solo – and lots of little furballs carrying primitive weapons.

MINT IN THE BOX

The Forces of Destiny shorts will be accompanied by a new line of Hasbro “Adventure Figure” toys that aim to blend the qualities of traditional dolls (11-inch height, rooted hair, changeable outfits) with old-school action figures (weapon accessories, battle attacks).

“They all have an action motion that’s true to their character, so, for instance, Rey can swing her lightsaber,” Hasbro’s Samantha Lomow tells EW, squeezing the character’s legs to make her torso swivel as her blue laser sword cuts the air.

Most of the single figures are priced at $19.99, but some come in more elaborate playsets, retailing for $24.99. Those typically include a change of outfits (Endor Leia comes with both her camouflage poncho and her brown linen Ewok party dress. Wicket is included.)

Some are packaged with sidekicks: Rey is joined by BB-8, Hoth Base Leia comes with R2-D2, and Luke Skywalker shares his bubble pack with Yoda. Sold separately is the $29.99 deluxe Chewbacca, who is fully covered with fur, except for his face. (No brush included, although the walking carpet looks like he might need one after a while.)

Remember Kylo Ren snarling that in The Force Awakens? Women in the fandom have dealt with similar scorn.

The primary goal of Forces of Destiny was to reach novice fans – especially young girls who haven’t previously felt welcome in the fandom. But they’re meant to also appeal broadly. “That’s really the challenge: How do we make this relevant for somebody who is new to Star Wars – and someone who has experienced all of Star Wars,” Beck says. “We have these new access points for kids, but [the shorts] aren’t so reliant on knowing everything else that’s happened in Star Wars history.”

Those who do know the galaxy inside and out will still discover surprises, unexpected connections, and new lore in the shorts. “There are Easter eggs all over the place,” says Paul Southern, head of Lucasfilm licensing.

After the #WheresRey controversy, when collectors felt there was too little merchandise for the desert scavenger, and ongoing grumbling from some male fans about women being too prominent in the new movies (seriously, this is still an issue), Forces of Destiny arrives at a time when women and girls still feel pushback in genre fandom. (For other examples, see the vitriolic backlash to the female Ghostbusters movie, long before it was seen by anyone, and the persistent lack of Black Widow toys in the Marvel toy aisle.)

Even at the Star Wars Celebration gathering in 2015, Lucasfilm president Kathleen Kennedy responded to a fan question about which character she identified with by noting that, in the past: “I wouldn’t have had a lot of choices… But that’s going to change.”

Southern says Forces of Destiny is an effort to highlight the female characters – but that doesn’t mean the stories are only for girls or women. “Everybody who looks at Star Wars, they take something out of it for themselves,” he says. “The strong female leads that we have, going back to Leia… while they don’t just appeal to females, that’s an important element. They provide very strong role models.”

In other words, this is one way to bring balance to the Force. 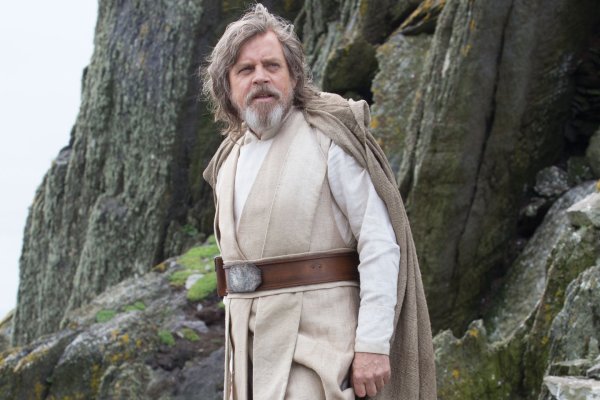 Here's How to Watch the 2017 Star Wars Celebration Live
Next Up: Editor's Pick