South Korea’s top diplomat said Thursday he was confident that the U.S. would consult Seoul before taking any serious action against North Korea, seeking to soothe lawmakers amid heightening tensions on the peninsula.

U.S. President Donald Trump set Seoul on edge late last week when he dispatched an aircraft carrier and naval strike fleet to waters near the peninsula. The move, announced one day after the U.S. rained missiles on a Syrian air base without seeking congressional approval, signaled to foreign leaders that Trump is more disposed to authorizing military action than his predecessor.

Pyongyang viewed both the U.S. strike in Syria — carried out in response to a chemical attack blamed on the Syrian government that killed upwards of 80 people — and the naval deployment to Korean waters as direct challenges from Washington. The North Korean government warned of “catastrophic responses” to any further aggression by the U.S. military.

U.S. officials were on alert this week as North Korea prepared to celebrate the 105th anniversary of the birth of the country’s idol and founder Kim Il Sung, an event sometimes observed with extravagant displays of nationalist zeal. Journalists visiting Pyongyang for the occasion were bused to an undisclosed location Thursday morning after being told to prepare for a “big and important event,” which turned out to be the opening of a new skyscraper-lined street, according to Channel News Asia.

While Thursday’s event didn’t live up to the hype, experts speculate that Pyongyang’s erratic leader Kim Jong Un could still be planning either a nuclear test — which would be the country’s sixth — or another ballistic-missile test, launches which have become increasingly frequent over the past year. North Korea has made considerable progress in recent years toward its goal of developing a nuclear-armed intercontinental ballistic missile capable of reaching U.S. soil.

Agence France-Presse reports that satellite imagery analyzed by U.S. researchers, published on the site 38 North, shows activity on and around the site of North Korea’s previous nuclear tests. The research described the area as “primed and ready” for another test, with multiple vehicles and personnel appearing to be active on the site as of Wednesday.

Trump met with Chinese President Xi Jinping for the first time last week at the U.S. leader’s Florida estate, where the threat of a nuclear-armed North Korea was high on the agenda, though no breakthrough was announced regarding further cooperation. Trump had previously warned that he could seek to leverage trade in his talks with the Chinese President to pressure him into helping the U.S. counter the threat.

Xi and Trump spoke again by phone this week, and the Chinese leader urged his counterpart to pursue a “peaceful” resolution to the crisis. Anxieties have risen in recent weeks, particularly in the wake of the rapid escalation in Syria, that the U.S. could choose to carry out a preemptive strike or otherwise provoke Pyongyang. Trump has warned that, with or without China’s help, the U.S. stood ready to act unilaterally. Secretary of State Rex Tillerson suggested during a trip to East Asia in March that the Administration was “exploring a new range of diplomatic, security and economic measures,” and that “all options are on the table.” 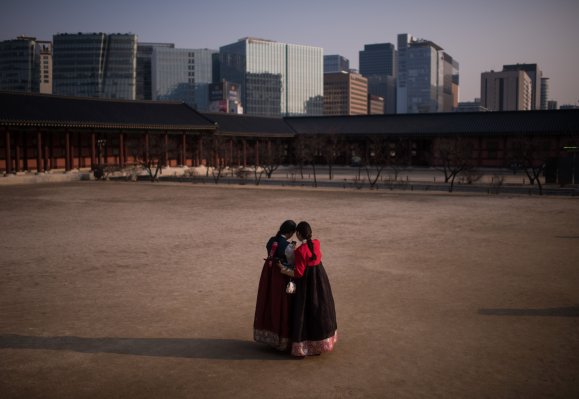