I Left My Stable Career to Launch a Baby Clothing Company

Nobody could say that I wasn’t warned. In 2007 when my brother launched the men’s brand Bonobos, I was an “innocent bystander.” I had never heard the term “startup.” I really wasn’t aware of what a risk it would be for him to launch an online men’s apparel company. All the talk of fundraising and pre- and post-money sounded foreign to me. But what I could understand and relate to were the day-to-day realities of his rapidly growing company and the complexity of managing its personnel and operations. My background in the pharmaceutical industry made it easy for me to seem like the savvy older sister doling out advice. “You should really consider an actual office,” I said to him on one visit when I came to find the walls of his small apartment lined with shelves of pants, and his customer service team seated around his kitchen table. I was impressed, but told myself that the wisdom, support and advice that I had offered was, in some small way, lending to his emerging success.

When my daughter was born in 2010, my brother was there pacing the hospital’s hallways. But not out of nerves for me — he was closing his first venture round. Bonobos and its startup culture had invaded all aspects of our lives — but in that hospital bed, recovering from giving birth, I saw an opportunity. I was frustrated by the clothing my newborn daughter was given to wear in the hospital, so I started visiting online baby shops in the hopes of finding a soft and more attractive alternative that actually fit her. I discovered, however, that no one owned the space of creating a positive customer experience for new moms. Blame it on the lack of sleep, but this experience somehow led me to think it would be the perfect time to start my own baby clothing company. And with my “extensive” experience advising my brother on how to run his own company, I thought I would seamlessly transition to new motherhood and CEO.

That seamless transition took three years. Giving up the steady paycheck was terrifying. And beyond that, I had a precious mini-human who was depending on me for everything from diaper changes to love. But my brother decided it was time to share some advice with me: “It’s now or never,” he said. “You might never have another chance like this.”

The first two years I was a full-time mom and worked on the business during naps and late into the night. I learned the first fundamental lesson of entrepreneurship in those early days: patience. Great things don’t happen overnight. You also really have to do your homework to get going. Given my lack of free time with a newborn, I had no choice but to take it slow, and I’m so glad I did. It gave me the time to learn, make mistakes and go to market with a product I was truly proud of.

Fast forward to 2014, the year we fully launched my company, Monica + Andy. Between juggling a 3 year-old and a business, my hands were more than full. Managing my daughter’s needs, answering phone calls, writing emails, going to meetings, fundraising, hiring, designing clothes, approving branding and planning the marketing became the norm. The slow pace of the previous two years had all but disappeared. This led to my second fundamental lesson: entrepreneurship has a dirty side that no one ever tells you about. It’s [insert expletive] hard. A job is something you can leave. You can get in the car, drive home and turn it off. But when you’re entrepreneur? There’s no escape.

It was this phase that taught me the third and most important lesson: utilize your support network. My parents have gone without a formal thank you for a long time, so, Mom and Dad: Thank you. I could not have started Monica + Andy without your help. My husband has also been incredibly supportive, but he too has his own business, which is a story for another day. The truth is no one can do it alone. We all need our friends, our spouses, our partners, our siblings and yes, our parents. Lean on them. Learn from them. Ask them for support. And most importantly, learn to accept all kinds of help. Even when it’s “just” advice.

My brother, by accepting and considering my advice, started me down this path. His willingness to listen and trust my insights empowered me to believe that I too could be an entrepreneur. Despite the pace of my day-to-day life, I wouldn’t have it any other way. Somehow, in the midst of the chaos, I’m having the time of my life. In the short time I’ve been in this role, I’ve learned the most surprising secret of all: No one really has any idea what they’re doing. We’re all just trying to fake it until we get a little closer to where we want to go. And in a really strange way, I realize now more than ever how much there is left to learn. Still, I have no desire to be an expert. The secret to growing your business, I’ve found, is to continue to grow and evolve yourself. It’s the climb that is so much more exhilarating than the peaks.

Monica Royer is the founder of Monica + Andy, a clothing store that specializes in quality, organic baby apparel. This is part one in a four-part series about how she started her company. Part two will focus on what it’s like to fundraise as a first-time entrepreneur. 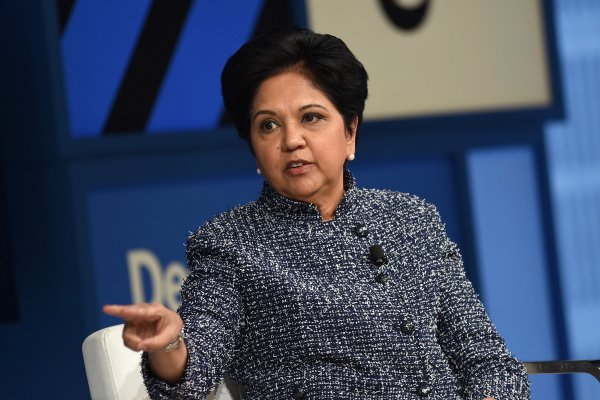 4 of the 10 Highest-Paid CEOs Are Now Women
Next Up: Editor's Pick