President Donald Trump speaks during a strategic and policy discussion with CEOs in the Eisenhower Executive Office Building (EEOB) on April 11, 2017 in Washington, D.C.
Olivier Douliery—Pool/Getty Images
By Katie Reilly

President Trump took to Twitter on Wednesday to praise the victory of a Republican candidate in Tuesday’s special congressional election in Kansas.

Estes did, in fact, win the election for the House seat vacated by Mike Pompeo, who left to become Trump’s CIA director. But Trump’s tweet missed several key points about the surprisingly competitive race.

Estes defeated Democratic candidate Jim Thompson by less than seven points, earning 52.5% of the vote while Thompson earned 45.7% — a difference of about 8,000 votes, according to the New York Times.

That’s a relatively small margin in Kansas’ right-leaning 4th district, which Trump won by 27 points and Pompeo won by more than 30 points in November.

The race attracted almost no national support from the Democratic Party. While the Democratic Congressional Campaign Committee launched a phone campaign to reach 25,000 households on the day before the election, the committee did not devote other financial resources, the Kansas City Star reported.

“There was potential here,” Thompson’s campaign manager, Colin Curtis, told the Star before the election, discussing the campaign’s struggle to attract funding. “We tried to make that selling point. We didn’t get buy-in initially.”

Meanwhile, the National Republican Congressional Committee poured $130,000 into the race, and other GOP leaders made a strong push for Estes. Both Trump and Vice President Mike Pence recorded robocalls for him, and Texas Sen. Ted Cruz appeared with him at a campaign rally in Wichita on Monday.

A Democratic victory was always unlikely

Kansas has traditionally been a Republican-leaning state, and the state’s 4th congressional district has historically voted red. (Republican lawmakers have held the 4th district seat for more than two decades.) Tuesday’s special election gained national attention simply because it was a competitive race.

The significant last-minute push by GOP leaders suggested that Republicans were nervous and sent a message that an upset was a possibility. Political strategists noted that even if Thompson managed to narrow Estes’ margin of victory, it could spell trouble for the Republican Party in future elections.

“If [Democrats] get it down to under 10 percentage points, that would be some kind of victory,” said University of Kansas political science professor Burdett Loomis the day before the election. 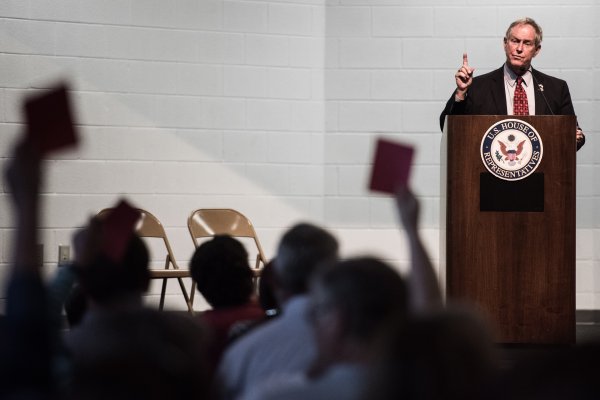 The Congressman Who Shouted 'You Lie' at President Obama in 2009 Got the Same Treatment
Next Up: Editor's Pick