Social conservative leaders were jubilant in the White House Rose Garden on Monday morning as they watched their top political prize, newly minted Supreme Court Justice Neil Gorsuch, take his oath of office. But their pause to celebrate was brief.

After the ceremony, Susan B. Anthony List President Marjorie Dannenfelser, Concerned Women for American President Penny Nance and Faith and Freedom Coalition President Ralph Reed took a moment to huddle about their other long-touted goal: federal defunding of Planned Parenthood.

What seemed a near-certain victory in January could soon face defeat, barring a new show of unity from Congressional Republicans. Anti-abortion activists worry their best chance to defund Planned Parenthood in years may disappear if the U.S. House of Representatives chooses not to use a legislative maneuver, known in Washington as the budget reconciliation process, to repeal and replace President Obama’s signature health care law.

“I am not saying it is the only vehicle, but it is right now the primary and the cleanest,” Nance says. “This has to be done.”

Conservatives have long said they would use budget reconciliation to repeal the Affordable Care Act and defund Planned Parenthood because it requires just 51 Senate votes instead of the usual 60 required to overcome a filibuster on regular legislation. That effort fell apart almost three weeks ago when House Republicans failed to agree on health care legislation. Vice President Mike Pence has since been working to revive the possibility and broker agreements between the conservative House Freedom Caucus and moderate Republicans. Congress faces a two-fold deadline of April 28 to pass a budget that will keep the government open and exploit the 51-vote loophole. Congress can choose to avoid a shutdown with — or without — addressing Planned Parenthood.

Despite the setbacks, social conservatives still see a potential health care bill as their main tool to defund Planned Parenthood. Dannenfelser says that the reconciliation vehicle is “the biggest problem, but it is also the biggest hope.” Nance says she, and her White House contacts, believe passing a health care bill is still a “very real” possibility.

Failure would be a heavy blow for the movement that urged evangelicals and conservatives to the polls in November with promises of an anti-abortion Supreme Court justice, the repeal of the Affordable Care Act, and the defunding of Planned Parenthood. “It was a promise from President Trump to our grassroots,” Nance says.

“That is how we turned this personality-driven election into a policy election,” Tony Perkins, president of the Family Research Council, says. “If Republicans want to maintain the majority and have the ability to lead the country, they have to follow through on those promises.”

Social conservative leaders say they are not yet ready to entertain the possibility of defeat. They are using this week, when Congress is in recess, to push last-minute efforts forward. The Susan B. Anthony List has placed a six-figure ad and digital call campaign during the recess, urging anti-abortion constituents to contact their representatives to ask them to pass health care reform that defunds Planned Parenthood. Targets include House Freedom Caucus members, Tuesday Group moderates and House leadership.

“There is no future right now, there is only now,” Dannefelser says. “Now is about the heath care bill. It is the thing that we must have.”

Their negotiations on Capitol Hill continue, especially with Freedom Caucus members and moderates who have largely been past allies against abortion policy. “We are hopefully being helpful in encouraging them to continue to talk to the White House and to continue to look for opportunities to work together,” Nance says. “Our main goal right now is to lean into that conversation.”

Ironically, Republicans at the center of the health care dispute largely agree on anti-abortion policy, but not on the economics of the larger health care repeal and replace package. Perkins argues that life issues actually help keep conservatives at the negotiating table.

“For the first time in my career, my issues, the life issue, is not the most controversial issue in the bill,” Nance says. “In fact in this case, it is a sweetener.”

If lawmakers do not reach a health care deal by the end-of-April deadline, they could opt for a short-term agreement to keep the government running through the end of the current budget year in September. When the next fiscal year starts on Oct. 1, they can try again. But kicking that down the road to fall would be seen as a setback, for both the effort to defund Planned Parenthood and to make the Hyde Amendment permanent.

“I am extremely concerned that if this all fall apart, that two of our top priorities will fall apart with it,” Dannenfelser says. 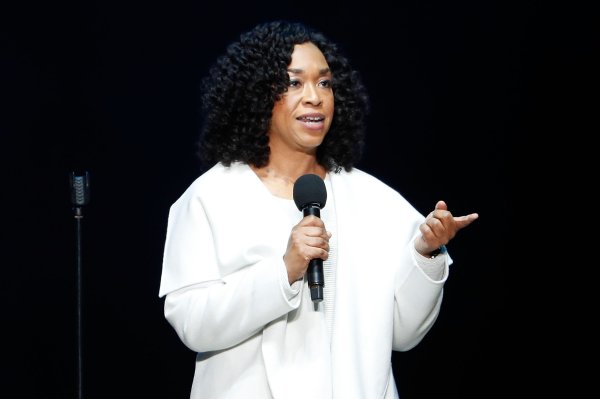 Shonda Rhimes Joins Planned Parenthood's National Board: 'Women's Health Is Under Fire'
Next Up: Editor's Pick