On Tuesday, news broke that comedian Hasan Minhaj will be hosting this year’s White House Correspondents Dinner. It’s a prestigious gig—previous hosts have included the likes of Stephen Colbert, Conan O’Brien, and Jimmy Kimmel—and provides a stage for Minhaj to poke fun at our political climate as is tradition, despite the fact that Donald Trump will not be in attendance. Here, five things to know about the rising young comedy star.

Born and raised in California, Minhaj father immigrated from India, and he’s Muslim. His one-man show, Homecoming King, is all about his experience as part of an immigrant family and the challenges he faced growing up in a predominantly white town. Homecoming King is also getting a spring release on Netflix, making this year a pretty exciting one for Minhaj. (The title pays homage to a seminal experience for Minhaj: he was stood up by his prom date because, allegedly, her parents didn’t think he would be a “good fit” in photos. Luckily, Minhaj later found the right date, and is now married to a partner he calls his “ride or die.”)

As a correspondent for The Daily Show, Minhaj has been the star of politically scathing segments. In a particularly popular piece from 2015, he and Trevor Noah took on then-nominee Donald Trump’s proposed Muslim ban.

He also knows his way around an interview with a celebrity politician, having gone head to head with Canadian prime minister Justin Trudeau while wearing a Canadian tuxedo.

Other roles have included hosting C-SPAN’s Radio and Television Correspondents Dinner in 2016 and starring in his own viral web series, The Truth with Hasan Minhaj. In The Truth, Minhaj called out actor Ashton Kutcher for appearing in brown face in advertisements and unpacked the Sikh temple shooting; the segments are less comedy than explainer, with a humorous edge. Besides that, Minhaj popped up on the Arrested Development revival and HBO’s Getting On.

He was inspired to try his hand at comedy after watching Chris Rock videos in college. Minhaj was studying political science at UC Davis when he discovered stand up via the Chris Rock special Never Scared. That kicked off his experiments in local comedy, which led to winning comedy competitions, booking minor TV gigs, The Daily Show role, and now, his hosting duties.

He’s been a public advocate for LGBT rights. He penned an open letter, alongside academic Reza Aslan, encouraging Muslims to support legalization of gay marriage as fellow members of minority communities in the U.S. “Bottom line is this: standing up for marginalized communities, even when you disagree with them, is not just the right thing to do, it’s the Muslim thing to do,” they wrote. 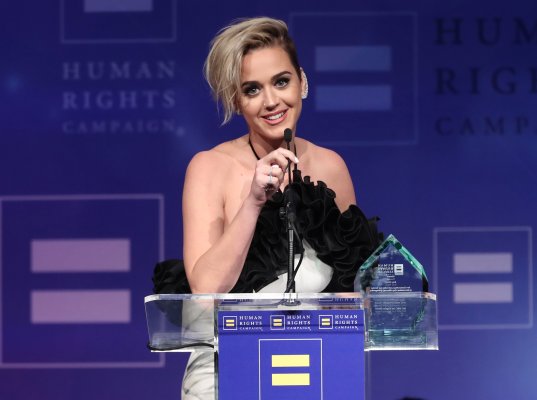 Katy Perry Shut Down Rumors That She's Dating Ryan Phillippe With a Single Tweet
Next Up: Editor's Pick