Dwayne Johnson (The Rock) and Vin Diesel (R) pose for photographers during the premiere of the movie "Fast and Furious 5" at Cinepolis Lagoon on April 15, 2011 in Rio de Janeiro, Brazil.
Buda Mendes/STF—Getty Images
By Raisa Bruner

Last summer, reports surfaced of bad blood between The Fast and the Furious co-stars and Hollywood heavy hitters Vin Diesel and Dwayne “The Rock” Johnson.

(The Rock posted an Instagram message complaining about the male actors’ behavior on set, although he didn’t name names.) But as the two brawny and beloved action heroes take to the press circuit to promote the new Fate of the Furious this month, it looks like they’ve decided to approach their so-called feud with tactful diplomacy. In fact, Diesel even went so far as to call Hollywood’s highest paid celebrity “Uncle Dwayne,” according to Entertainment Tonight.

“Dwayne Johnson only has one big brother in this film world and that’s me,” he told USA Today in an interview over the weekend. “I protect everybody including Dwayne. I protected Dwayne more than he’ll ever know. And it doesn’t matter. He doesn’t have to know. But he appreciates it. He knows it,” Diesel said. He also insisted that he’s very much there to root The Rock on, given the fact they are both pioneering multicultural stars in an industry not known for its openness to diversity.

“It’s not always easy being an alpha. And it’s two alphas,” Diesel further explained of the potential source of their troubles.

The Rock’s response was a little more general. “Just like, in life, you have different philosophies and people have different fundamental philosophies on how you do things,” he told ET during a red carpet interview. It’s also worth noting that in the blockbuster franchise, Diesel’s Dominic Toretto and The Rock’s Hobbs play constantly-feuding frenemies.

Is art imitating life? Is life imitating art? Or are “Uncle Dwayne” and Vin just blowing this up for the public relations? The characters in question are actors, after all. 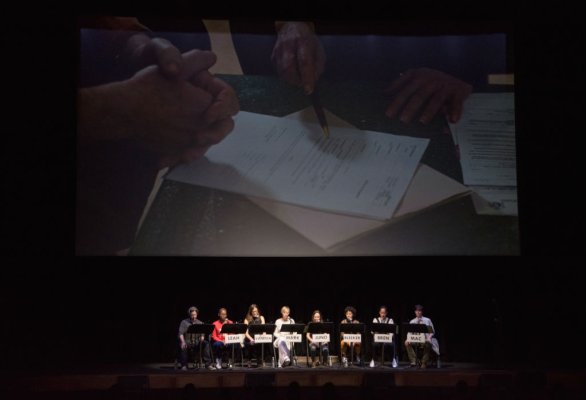 Ellen Page and Jennifer Garner Had a Juno Reunion While Raising Money for Planned Parenthood
Next Up: Editor's Pick