Sergio Garcia’s a player who’s been so good, for so long, you can ID him by one name — Sergio! — even though he’s never won a major championship. Entering Sunday’s final round of the Masters, he was 0-73 in the majors. A few years back, after another crushing finish at Augusta, he all but waved a white flag, saying “I don’t feel capable of winning. I’m not good enough for the majors.”

But here he was, on the 18th hole at the Masters, a short putt away from winning a classic shot, countershot slugfest with Justin Rose of Great Britain and ending his tortuous drought in the majors. Garcia had just missed putts on the 16th and 17th holes, Sergio being Sergio and folding once again. But no way he’d buckle a third straight time, right? Not even Sergio could miss this opportunity.

You could only hear the birds as Garcia’s putter touched the ball. The shot, and his first major, rolled right of the hole. Groans. Heads on hands. Regrets. We’d be heading to a playoff. Good gosh, golf’s the devil incarnate.

Luckily for Garcia, Rose — the 2013 U.S. Open champ and the reigning Olympic gold medalist — put his playoff tee shot in the pines, a mistake that eased the pressure on Garcia ultimately cost Rose the Masters. Garcia birdied the playoff hole to set off “Serg-i-o! Serg-i-o!” cheers. We’ll never know how Garcia would have handled true playoff pressure, after having missed so many chances in the last three holes. For Garcia, his fans and all of Spain, that mystery will do just fine.

He took the title on what would have been the 60th birthday of his idol, Spanish legend Seve Ballesteros, who won the Green Jacket in 1980 and 1983 and died of brain cancer in 2011. Garcia eagled the 15th hole, becoming the first Masters champ to eagle on the back nine since Jose Maria Olazabal — of Spain, naturally — did so in 1994.

Garcia stormed onto the golf scene in 1999, at the PGA championship in Medinah, Illinois. He hit a famous shot from behind a tree, with his eyes closed, then scissor-kicked up the fairway to see where it landed (on the green). Just 19, Garcia was young, brash, and a potential Tiger Woods rival for years. Woods won that PGA title — and so many other majors in the aughts — while Garcia never lived up to that initial promise (though he managed to punish America with his excellent Ryder Cup showings). In this prime, Woods simply wouldn’t stand for a foil.

He developed a reputation as a complainer — Garcia protested, for example, about playing in the rain during the 2002 U.S. Open, saying officials would have stopped play for Woods. Even worse, he played slow. His old habit of gripping and re-gripping his club ticked off fans and fellow players alike. In 2013, Garcia was asked in jest if he’d invite Woods, his long-time nemesis, to dinner. Garcia said yes, and “we will serve fried chicken.” He apologized for the racially-insensitive remark. “I answered a question that was clearly made towards me as a joke with a silly remark,” Garcia said, “but in no way was the comment meant in a racist manner.” Woods sent a congratulatory Twitter note to Garcia Sunday night.

So it was odd, really, seeing Sergio as the sentimental favorite at Augusta. Back in ’99, few would have imagined that it’d take nearly two decades for a kid running up the Medinah fairway to win a major. America has actually warmed to Sergio Garcia. For giving golf fans an unforgettable Masters Sunday, he may even be beloved. 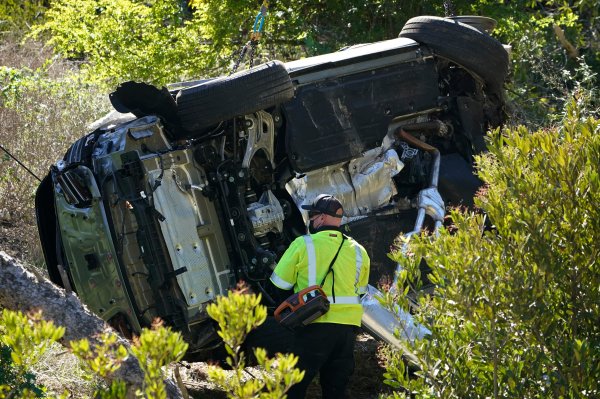