The writer of a play about Antonin Scalia said he hopes Neil Gorsuch, who was confirmed Friday to fill Scalia’s long-vacant Supreme Court seat, will carry on the late justice’s tradition of seeking out opposing viewpoints — even if only to demolish them.

“What I most like about the court is the way these justices can disagree with one another on legal and even political points but remain cordial and remain civil to one another,” said John Strand, whose play, The Originalist, focuses on Scalia, a conservative who issued polarizing opinions and left a lasting influence.

Having spent so much time studying Scalia, Strand said that the late justice’s life has a lesson to offer his successor: that, no matter what your legal philosophy, it’s important to remember that the Supreme Court has long been a place for people who are willing to see the other side of an issue.

“I wonder if his passing is the end of that era,” Strand said. “It doesn’t have to be…. That would be a shame to lose that, and it’s a great model for the rest of us. I would like it if the Senate or the House would follow.”

“I think he loved to argue and debate and hear the other side of the story on any issue,” Strand said.

In his three decades on the court, Scalia was criticized by liberals and lauded by conservatives for his strongly worded opinions, including those against the legalization of same-sex marriage and in support of Second Amendment rights.

While acknowledging that Gorsuch “doesn’t need advice from a playwright,” Strand said he hopes Gorsuch brings to the bench a penchant for engaging opposing viewpoints.

The Originalist premiered in Washington, D.C. in spring 2015, about a year before Scalia’s death. It recently concluded a run in Sarasota, Fla. and will soon open in Pasadena, Calif.

Taken alongside the bitter 2016 presidential election, the record-breaking battle over replacing Scalia became representative of deep partisan divisions in American politics. Strand noted that Gorsuch’s contentious confirmation by a vote of 54 to 45 on Friday “seems a long way away” from Scalia’s 98-0 confirmation in 1986.

“From a playwright’s point of view, Scalia was a really intriguing character. Honestly, there’s no one else on the court quite like that,” Strand said. “I did not agree with his viewpoints politically. I understood them legally, but I think what drew me to Scalia was how he became such a figure of divisiveness, such a polarizing person.”

In the play, Scalia remarks that if he died, “Half the country would cheer, and the other half would argue over who replaces me on the bench.”

Strand said that line and others have taken on new meaning since the play premiered. Another line refers to Scalia as the most polarizing figure in American politics.

“After the recent election,” Strand said, “I would say that’s no longer true.” 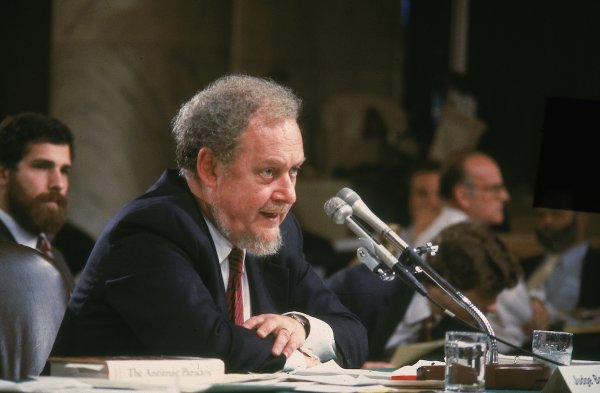