Don Rickles' Rabbi: He Made Us All Equals

The comedian and actor on "The Kraft Music Hall" on Sept. 18, 1968.
NBC/NBCU Photo Bank/Getty Images
Ideas
By Rabbi David Wolpe
Wolpe is the Max Webb Senior Rabbi of Sinai Temple in Los Angeles, the author of eight books and has been named one of the 50 most influential Jews in the world by the Jerusalem Post.

I was a young Rabbi when first introduced to Don Rickles. I’d been greeted lots of ways, but his was unique:

“Nice to meet you. In a few years, you will get pimples, but they’ll pass.”

On meeting the most famous insulter in the world, one was struck by his essential sweetness. He got away with the jocular savagery because you knew — you really knew — that deep down he was kind and intended no harm So the cannon blasts — and his sheer relentlessness — came as a shock, and once the laughter started, there was no stopping.

The Rickles family have been members of my synagogue since long before I came as the Rabbi. The gym is “Rickles gymnasium” since his benefit performance raised the money to build it. So one day as requested, I showed up at his place for his grandson’s brit milah. I rang the bell. “Who is it?” answered the famous voice. “It’s Rabbi Wolpe.”

Now, that alone was funny. And I laughed. But it didn’t end there. Rickles kept me on that stoop, ringing and refusing, for a good ten minutes. Each time he pretended he didn’t know who it was, and came up with a new variation. “Rabbis not wanted.” “Rabbis not needed.” “Are you a deaf Rabbi?” It wasn’t until he could hear that I was convulsed with laughter that the buzzer rang and I was admitted.

Rickles grew up in a home that was not particularly pious but was deeply Jewish. Yiddish was his mother tongue, and when he was in synagogue — which was rare but not unheard of — he knew the Hebrew service very well. Here too, when we came around with the Torah before the sermon, I could count on some variation of the following:

“Cut the sermon. I don’t want to be here anyway.”

It didn’t matter how much I braced myself. He always got me. It was his delivery, the half-shouted, sharp, fed-up way he complained, which made it impossible to ignore. He feigned constant aggrievement, but was so joyous in his grumble that you could not help but laugh.

The last time I had the chance to be in his company was a few months ago, when I sat with him and his wife Barbara at a birthday luncheon for a friend. No matter how much you read about Don Rickles, you cannot read enough about the devotion, patience and wisdom of his wife Barbara. Lovely and loving, she understood him top to bottom: As he often said, he was a very lucky man.

At the luncheon, he was in a wheelchair and feeling very tired. He talked to me about his father. He told me that while not particularly religious, his father Max was the one who made sure the synagogue had everything it needed. His father was the one who took care of the poor and needy in their Brooklyn community. His father, he explained, was something of a contradiction — he wasn’t so much a believer in God as someone who believed in taking care of people.

The lunch was on a Friday, and it was starting to get late. “Rabbi, you better run home for Shabbes, or I’m telling everyone you’re an apikorous” — the traditional Jewish word for “heretic.” As I left, I realized how much he was like his father: traditional norms weren’t his way, but he had a deep reverence. He would have been disappointed if I hadn’t been intent on getting home before sundown.

To call Don Rickles politically incorrect is intellectually incorrect. He was in a certain way the epitome of political correctness — he did not discriminate, everyone was fair game. The only people he would not insult were the vulnerable, those who would be wounded by his words. Rickles’ humor was the great leveler, whether you were a President or Frank Sinatra. As Daveed ben Mordecai is laid to rest, the world has not only lost someone who made us laugh; it will have lost someone who saw people the way we aspire to be seen: flawed but resilient, and all, ultimately, the same. 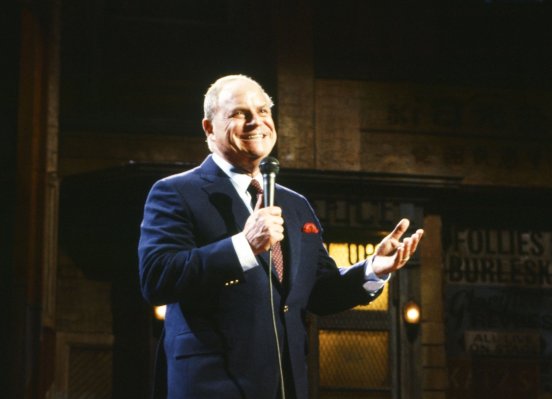 I Love You, Don Rickles
Next Up: Editor's Pick