Timeline: The Week the Trump Administration Changed Its Mind on Syria

President Donald Trump, who has differentiated himself from his opponents and predecessors by insisting he would not pursue American military intervention abroad, authorized an air strike on an airfield in Syria late Thursday night.

The strike comes in response to a deadly chemical weapons attack in Syria’s Idlib province that the international community has blamed on the regime. Although U.S. allies were quick to welcome the U.S.’s action, the timing of the move comes as a surprise. President Trump has consistently argued against removing Assad from power and old tweets of his show him urging President Obama not to intervene in Syria.

Below is a timeline of a week that completely altered the U.S. stance on Syrian intervention. All times are EDT.

A likely chemical attack is launched on the rebel held Idlib province in northern Syria, early on Tuesday local time. At least 86 people including children are killed, according to the Associated Press, and hundreds more are wounded.

Harrowing accounts and images of the casualties and of survivors struggling to breathe quickly lead to worldwide outcry. Russian and Syrian governments issue denials of involvement. The U.S. and U.K. are just some of the countries that place responsibility on the regime.

The chemical used is suspected to be the nerve agent sarin gas, Turkish officials say. The deadly chemical has only been used as a few times as a weapon.

The White House issues a statement from President Trump that condemns the attack as “heinous” but also attacks President Obama for failing to act in the past against the use of chemical weapons in Syria.

Press Secretary Sean Spicer reads the statement to reporters at a press gaggle, but adds that the “political realities that exist in Syria” had to be acknowledged in reference to Assad’s position of leadership.

Secretary of State Rex Tillerson condemns Assad as having acted with “brutal and unabashed barbarism” and calls on Russia and Iran to prevent further attacks.

At an emergency meeting on Syria, convened at the United Nations Security Council, UN ambassador Nikki Haley delivers a powerful speech decrying the attack. “How many more children have to die before Russia cares?” Haley says, according to The New York Times. “When the United Nations consistently fails in its duty to act collectively, there are times in the life of states that we are compelled to take our own action.”

At a joint press conference with King Abdullah II of Jordan, President Trump says the attack has caused him to change his position towards Syria’s President. “My attitude towards Syria and Assad has changed very much,” Trump says. The attack “crossed a lot of lines” and had “a big impact” on him, he adds.

A Russian ministry official sends a text to CNN, mocking the unclear U.S. strategy on Syria. “Russia’s approach to Assad is clear. He is the legal president of an independent state. What is the U.S. approach?” Russian Foreign Ministry spokeswoman Maria Zakharova said.

President Trump hints at possible military intervention for the first time. Asked about Assad when travelling on Air Force One President Trump said “he’s there and I guess he’s running things so something should happen” the Associated Press reports. The President makes the comments while travelling to meet with Chinese President XI Jingping in Florida at Mar-a-lago, his private club.

Shortly after, Tillerson makes a statement saying there was “no role” for Assad in the future governing of Syria. A week earlier, he had said the “longer-term status of President Assad will be decided by the Syrian people.”

59 cruise missiles are launched by the U.S. in the air strike. The launch took place early Friday morning, Syrian local time. The Syrian military have said that at least seven people were killed, The Associated Press reports and that six jets were destroyed.

The move is welcomed by U.S. allies including the U.K. and Israel. Moscow condemns the strike and say that they were warned before it occurred. 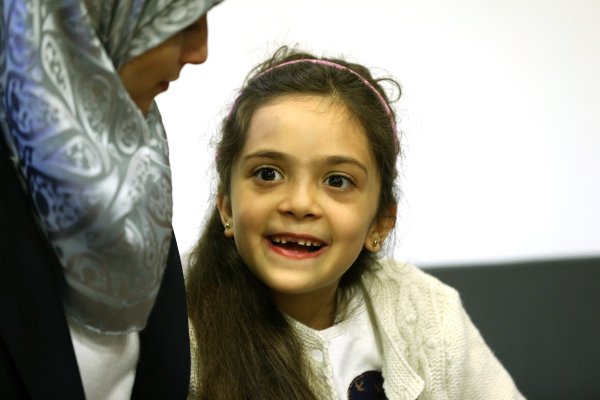