The image is unbearable. The photograph, released by the Associated Press, shows the lifeless bodies of at least seven children in the minutes after a chemical weapon attack on Khan Sheikhoun, a rebel-held town in Syria. Piled up in the back of a pickup truck, the dead are forever frozen in unnatural positions that speak of the last minutes of their lives.

It is the image Libération, a French newspaper, chose for its front page Thursday, shocking many of its readers.

“Our job, as photographers, as photo editors, is to see what we don’t want to see,” says Lionel Charrier, Libération’s director of photography. “We don’t take pleasure from it. These images are unbearable, but if we do it sparingly, sometimes we have to break the rules.”

In the hours after it was unveiled, Libération’s front page has garnered its supporters and critics. But for the newspaper’s staff, there was no question that this unbearable image be published. “This is not gratuitous,” Charrier says. “This is not done to sell copies.”

The photograph is a screenshot from a video published by Edlib Media Center, a group of militants opposed to the Syrian regime, in the hours following the chemical weapon attack. “It’s a photograph that we found on the Associated Press’ wire,” says Charrier. “We’ve captured, in the past, screenshots of videos, but the fact that the wires had authenticated the photograph was important for us.”

Libération also used its own sources to authenticate the events depicted, and watched several videos to confirm that the children’s bodies had not been positioned for a photo-op. “We watched as improvised first responders were carrying these children and putting them in trucks and pickups,” says Charrier.

The eerie nature of the image – its washed-out colors due to the original video’s quality – is reinforced by Libération‘s decision to expand the darkness of the pickup truck’s bed, which fades into the front page’s stark use of black.

Libération could have used other images that also showed the aftermath of the attack but, says the newspaper’s director of photography, these images didn’t highlight the hellish nature of the event. “This photograph reminds us of James Nachtwey’s images in Zaire [now called the Democratic Republic of Congo].” The U.S.’s envoy to the U.N., Nikki Haley, also showed a version of the image to the Security Council on Wednesday.

For Charrier, it was important to grab people’s attention. “When you do a front page like this one, you want to disturb people,” he says. “We can’t hide behind it. It’s the image with a capital I; the one we will remember this year.”

When asked whether Libération would have published a photograph of French victims of a terror attack, Charrier dismisses the argument. “In those cases, publishing these images would be playing in the hands of ISIS, which wants to create terror,” he tells TIME. “In this case, the Syrian regime denies these events ever happened. They don’t want people to see. This pushes us to say: ‘See, here it is.’ That’s an important part of our job.” 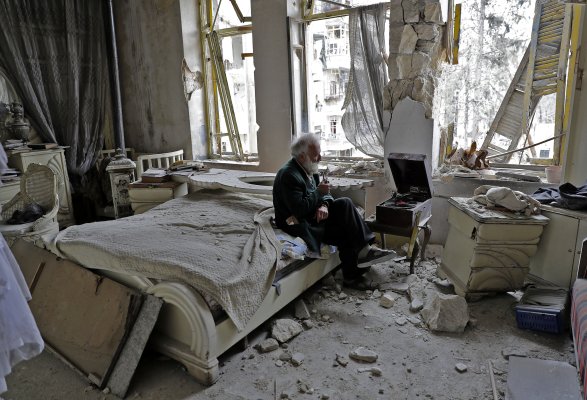 The Man on the Bed: The Story Behind a Viral Photo From Syria
Next Up: Editor's Pick