Pepsi pulled its controversial commercial starring Kendall Jenner that heavily references resistance culture sparked backlash earlier this week on social media. Many users said that the image of Jenner handing a police officer a can of Pepsi as a means of brokering peace was a tone deaf appropriation of a now iconic photo of a Black Lives Matter protestor approaching the officers.

Stephen Colbert seemed to agree with this evaluation in his opening monologue from Wednesday night on Late Show, when he said that the pseudo-protest depicted in the Pepsi ad spot was for “Attractive Lives Matter.”

“So far we don’t know what has caused all of America’s hot extras to take to the streets, but I’m guessing it’s a protest for ‘Attractive Lives Matter,'” he said.

Colbert also took Pepsi to task for its wishy-washy protest culture theme, citing the vague signs that had phrases like “join the conversation” as “corporate.”

“They might as well be holding signs that say, we are all the core demographic,” Colbert joked.

The host concluded his thoughts on the commercial with this final thought on Pepsi’s famous slogan, “Live for now.”

“Live for now especially if you’re Pepsi’s marketing department,” he said. “I don’t think you guys are gonna be there for long.” 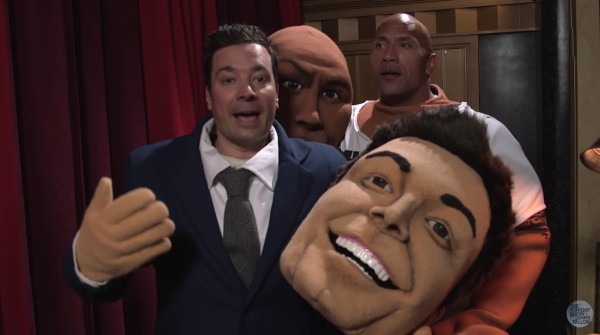 Watch The Rock and Jimmy Fallon Photobomb Unsuspecting Fans
Next Up: Editor's Pick