“I don’t think there is ethnic cleansing going on,” Suu Kyi said during an exclusive interview with the BBC, claiming that the term was “too strong an expression” to describe the government’s treatment of the group.

The Rohingya are a stateless Muslim minority numbering about 1.1 million who mostly reside in the country’s western Rakhine state, where they have suffered decades of persecution.

More than 120,000 were displaced by deadly violence that began in 2012, and most Rohingya still live in squalid displacement camps where they are denied proper health care, education and basic freedoms. Other Muslims throughout the state have also since been denied freedom of movement and basic government services on the pretext of heightened security measures.

More than 94,000 Rohingya fled their homes in the weeks and months since, nearly all of them across the border into Bangladesh, claiming that security forces indiscriminately killed men and boys, raped women and destroyed property.

The Myanmar government has largely denied the allegations. The U.N. resolved in March to send an international fact-finding mission to the country to investigate, but the government rejected the resolution. Last month, the U.N. special rapporteur on human rights in Myanmar, Yanghee Lee, warned that the government “may be trying to expel the Rohingya population from the country altogether.”

Suu Kyi, a Nobel Peace Prize laureate, has come under heavy criticism for her silence on the issue. The BBC asked whether the West, which supported her pro-democratic efforts during the decades that Myanmar was under military rule, had misjudged her character.

“I’m just a politician,” Suu Kyi said. “I’m not quite like Margaret Thatcher, no, but on the other hand I’m no Mother Theresa either. I’ve never said I was.” 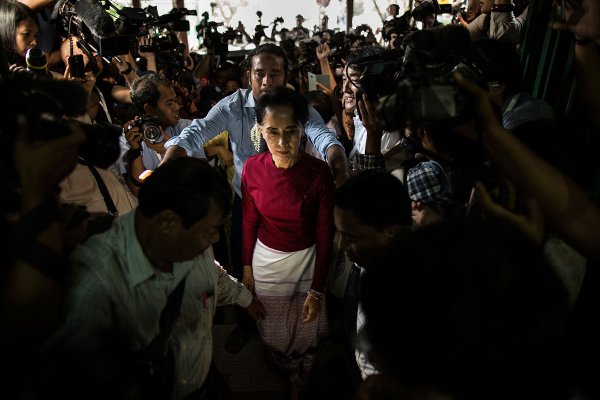