How to Survive a Shark Attack, According to Experts

Being attacked by a shark? Don’t panic.

As the weather warms in the U.S. and more swimmers head into the water, there is a rising likelihood of shark attacks. While the chances of being bitten are still very small, experts say it’s important to be prepared and not just thrash around in terror if the worst happens.

“We need to remember that sharks rarely ever bite people,” said Chris Lowe, a marine biologist and director of Shark Lab at California State University, Long Beach. “But [swimmers] do need to be aware that sharks may be present.”

If a shark does attack, the best way to respond is to fight back, Lowe said. A blow to the shark’s nose or a jab in its eyes could either persuade the predator to back off or surprise it enough to give victims enough time to swim to safety.

“You want to be aggressive because sharks appreciate size and power,” said George Burgess, curator of the International Shark Attack File (ISAF) at the Florida Museum of Natural History. “You want to fight like hell. Demonstrate you’re strong and not going to go down easy.”

A shark’s nose, eyes and gills are extremely sensitive and necessary for its survival, marine biologists say. “If it looks aggressive, hit it on the nose hard,” Burgess said. “It would be the equivalent to a neighborhood bully coming down the sidewalk and you taking the first swing. It will probably be surprised and won’t know what’s going on for a moment or two.”

That’s what authorities say a 17-year-old Kentucky girl did when a shark sank its teeth into her leg while she was swimming in Florida waters last Sunday. “She punched it several times in the face and mouth area with both hands,” said Michele Nicholson, a spokeswoman for Okaloosa County Sheriff’s Office. The shark swam away, and the teenager made it out alive, though she needed about 80 stitches.

It’s unclear if the girl’s defense directly caused the shark to retreat, since scientists speculate that sharks sometimes bite humans with no intentions of killing them. Sharks may take a bite as a warning to tell potential threats to leave their personal space, or when they mistake humans for their typical prey, like seals.

Still, the teen’s efforts could have only helped, Lowe said, because the worst thing a shark attack victim could do is fake being dead. Sharks are scavengers that are known to eat deceased prey, which they consider an easy meal.

Of course, there’s also an element of luck to any encounter with a shark.

“They’re such good predators. The reality of it is if a person is bleeding profusely and a shark feels that is a viable meal, there’s no way those people would make it to the beach,” Lowe said. “The survival part really just comes to luck after that.”

While many fear the apex predators, scientists say it’s still very rare for sharks to go after humans. The odds of being attacked by a shark in the U.S. are one in 11.5 million, according to the latest available data from the ISAF, the longest running database on shark attacks. That means an average person has a higher chance of getting struck by lightning or even dying from chronic constipation than he does of finding himself clamped in a shark’s mouth, statistics show.

It’s even more unlikely a person will die from a shark attack. In 2016, there were 81 unprovoked shark attacks on humans and only four human deaths across the globe attributed to a shark bite, Burgess said. “Out of the hundreds of millions of people who went into the water, only four didn’t come back as a result of a shark,” he said. “It’s a rare phenomenon.” 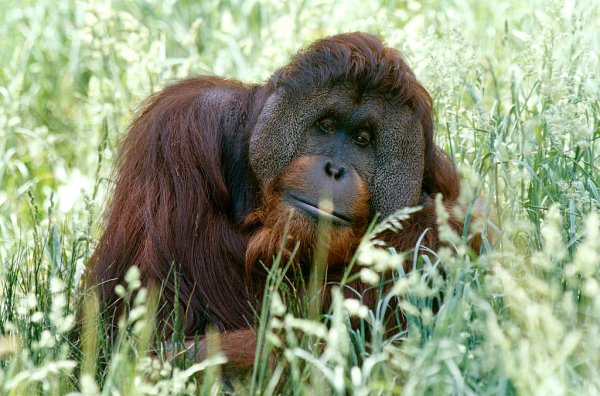 Apes May Be Able to Tell When You’re Wrong
Next Up: Editor's Pick