This Is Why I Didn’t Hire You

I have moved up and around in magazine publishing, an industry that’s notoriously tricky to navigate. I have hired and occasionally fired employees. I know what makes someone stand out from the crowd and who’s hiding from being noticed at all. And so, I offer some of the mistakes that were made in interviews — a few by me! — so you can avoid these pitfalls and land the job of your dreams on your own terms.

You Put Your Coffee Cup on My Desk

Interviews often start as casual, friendly meetings — but beware being too casual. I’ll never forget the time a senior-level editor breezed in for a get-to-know-you meeting with her lipstick stained coffee cup and her tote bag over flowing with papers and sneakers. She unloaded her gear, plopped down and looked for a place to put her cold coffee. She moved papers and files out of the way to place it on the corner of my desk. There was no position open at the time, but she wanted to discuss future opportunities. But what she conveyed was that she wasn’t interested in impressing me or even making a connection that might lead to something down the road. In short, don’t let your personal mess — figuratively and literally — spill over into a job interview! During the whole 20 minute meeting, I was desperate for it to end. After all, if she was too busy to throw out her coffee, I was too busy to pretend that this might turn into to a chance for us to work together.

You Were Too Enthusiastic

When it’s your first or second job, often you have little more to offer than your enthusiasm for the position and a promise that you’ll put your all into it. But you have to find something else to sell the interviewer: Leadership roles you took on at school or at a not-for profit, an interesting POV on the company’s latest ad campaign, a program you managed and streamlined — even if it was working at your parent’s business over the summer. One young woman came in for an interview with so much energy and enthusiasm, I was afraid she was going to jump across the desk and lick my face like a puppy dog! It was charming, but I couldn’t get her to tell me why she wanted the job, why the magazine connected with her or what she’d do in the role. All I knew was that she wanted it very badly, but sadly, that wasn’t enough for me to hire her. Being enthusiastic is good, but don’t forget you also have to share how you’re qualified.

I Was Too Enthusiastic

Sometimes, it’s my enthusiasm that gets in the way. I’ve found that often when I’m pursuing a candidate with everything I have, I’m actually working too hard to make something fit that isn’t quite right. Interviewing for a job is a lot like dating. Both of you have to want it to build a lasting relationship. If someone’s playing hard to get, it’s a sign that there’s an uncomfortable email coming soon.

JUST AS IMPORTANTLY, THESE ARE THE REASONS I DID HIRE YOU:

I met my last assistant, Meaghan, a full year before I hired her. Meaghan stood up and asked a fantastic question during a college-women’s summit where I was giving a keynote address. At that same networking event, she found my then-assistant, introduced herself, traded contact information and stayed in touch with her regularly for the next year. When that assistant was ready to move on, she called Meaghan in for an interview. It was a perfectly fine interview, but it was what happened next that really made her stand out. She left my office, wrote a hand written thank you and dropped it off at the messenger center. Then she emailed me a PowerPoint presentation called “5 Reasons I Should Be Your Assistant.” It was bold and clever. I was impressed by the lengths she went to in order to stand out from the pack of other recent college grads with equally impressive resumes. I hired her the next day.

You Showed Your Passion

I was on the fence about an editor who really wanted the job. I thought her work was too conservative, too quiet. I had imagined someone in the role who had more edge and who would write big, loud, booming, controversial stories. But she was determined to get this gig. So she followed up with a note that made a strong case for how she would command the role, and how she would work with me to deliver what I needed. I was still hesitant. And so she asked other, well-respected editors she knew to reach out to me and endorse her. She continued to follow up with thoughtful notes about why she was the right one for the role. I was so impressed with the way she proved herself to me. She gathered her resources, made a strategic plan, executed flawlessly and refused to take no for an answer. That’s exactly what you want in a teammate. And she was one of the best hires I ever made.

You Made Me Cry

You want your work to feel like a passion. And believe me, your boss wants that too. We all work too hard and too many hours not to care deeply about what we do for a living. One young woman, who was applying for a beauty editor position at the magazine, spent the whole interview impressing me with her resume and her accomplishments. But when I asked why she wanted the job her answer brought tears to my eyes. She told me that she believed in the power of makeup to make young women feel confident because she had struggled with terrible acne as a teen. She knew what it felt like to look in the mirror and hate what you saw looking back at you. And she told me about the moment that her mom bought her a book to teach her how to do her makeup so the pimples were less noticeable. This allowed her to stop focusing on her acne, and start focusing on her dreams. And most importantly, she wanted to bring that feeling to other young girls.

Your work is personal. How could it not be? So show your interviewer how passionate you are about the mission of the company and your potential role there and you’ll be so much closer to landing your dream job.

Ann Shoket is the author of The Big Life: Embrace the Mess, Work Your Side Hustle, Find a Monumental Relationship and Become the Badass Babe You’re Meant to Be and served as editor-in-chief of Seventeen magazine from 2007-20014. 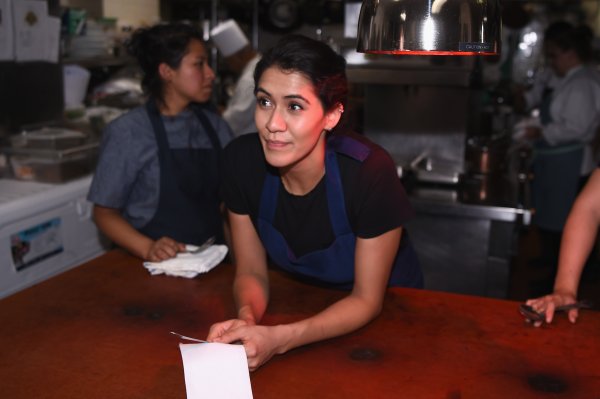 Only 3 Female Chefs Made the World’s Best 50 Restaurants List
Next Up: Editor's Pick