After a chemical attack killed over 1,000 people Eastern Ghouta in August 2013, the field hospital in Idlib province where Dr. Abdel Hay Tennari works scrambled to get stocks of Pralidoxime and Atropine.

“Pralidoxime is the antidote for Sarin,” says Tennari — referring to the deadly nerve gas considered a weapon of mass destruction. The hospital was only able to secure a limited number of doses of Pralidoxime due to both its high cost and the difficulty of obtaining it. Instead they bought thousands of milligrams of the much cheaper Atropine, which can be used to counter moderate cases of Sarin poisoning.

Those stocks helped save lives on Tuesday. Tennari, who spoke to TIME by telephone from Idlib, says he’s sure the deadliest chemical attack in Syria in almost four years was the result of Sarin or a highly similar gas. The 22 patients his hospital received on Tuesday showed clear signs of a nerve agent—difficulty breathing, weak muscles and constricted pupils. But more importantly, he says, he gave Pralidoxime to the five most severe cases and “they responded almost immediately to the antidote.” (Pralidoxime can also be used as treatment for other types of nerve agent poisoning, such as Soman and VX)

International leaders condemned the attack on the rebel-held town of Khan Sheikhoun on Tuesday, with the U.S. pointing the finger at the Syrian government of President Bashar Al-Assad. An attack, chemical or not, would be in defiance of ceasefire brokered by Russia and Turkey last year.

The regime has denied using chemical weapons in this case and others, though government forces have been accused of using chlorine gas on numerous occasions, as well as Sarin in the 2013 Eastern Ghouta attack that prompted Tennari’s hospital to stock up on the antidotes.

All signs seem to point to Sarin, which has long been prohibited as a battlefield weapon by international law. “He’s been using chlorine for years and no one seems to give a s–t,” Dan Kaszeta, a chemical weapons expert and Managing Director of Strongpoint Security Limited, said of Assad. “But chlorine is really a poorman’s chemical weapon.” Chlorine is not only just cheap, it’s accessible and unregulated as a chemical but can be used as a weapon to create panic and flush people out of areas so they can be targeted by conventional weapons. “It’s glorified tear gas,” says Kaszeta.

A man carries the body of a dead child, after what rescue workers described as a suspected gas attack in the town of Khan Sheikhoun, Syria, on April 4, 2017.
Ammar Abdullah—Reuters

The Syrian government also had the ability to make VX, according to Kaszeta, a nerve agent similar to Sarin, but one that evaporates much more slowly leaving the area contaminated. VX is classified as an “area denial weapon” because it leaves land unusable. Kaszeta says the Syrian government would have been unlikely to use it in territories it was attempting to occupy.

Former U.S. President Barack Obama said in 2012 the use of chemical weapons in Syria would be a “red line” for his administration, but instead of taking military action after the 2013 attack, he negotiated a deal through Moscow for Syria to give-up its chemical weapons arsenal and sign the Chemical Weapons Convention.

This raises questions for some about how the Syrian government could have carried out an attack like the one on Tuesday. Kaszeta says there are two options—it’s possible the Syrian government didn’t declare everything to the Organisation for the Prohibition of Chemical Weapons (OPCW) in 2013, or they simply made more. Plus monitoring is difficult in active war zone.

“They didn’t lose their technical knowledge. It’s not like the OPCW took away their scientists and chemical engineers,” says Kaszeta. “They took away some precursor chemicals and smashed up some labs. The know-how is still there.”

Kaszeta says while signs seem to point to a nerve agent, we won’t know for sure without lab results. He says it’s also possible that Tabun was used, a chemical that has similar effects to Sarin but is much easier to produce. The chemicals needed to make either Sarin or Tabun are generally prohibited or highly restricted on the world market.

Haid Haid, an associate fellow at London-based think tank Chatham House, says the lack of response from the international community to previous chemical attacks, particularly the 2013 Eastern Ghouta attack, has created an environment of impunity. “That was the turning point,” says Haid. “After that the regime knew no matter what happened in Syria the international community will not intervene.”

Assad has since become more comfortable, he says, as regional and international powers have “made it clear that changing Assad’s rule over Syria is no longer a priority.”

U.S. Ambassador to the United Nations, Nikki Haley, has called Assad a war criminal, but hinted that Washington may cooperate with him to achieve its main goal in Syria — defeating ISIS. However, President Donald Trump said Wednesday that the attack might have changed his thinking on Assad.

Nikki Haley, the U.S. Ambassador to the U.N., holds up pictures of victims of a chemical attack in Syria during an emergency meeting of the United Nations Security Council at the United Nations in New York on April 5, 2017.
Justin Lane—EPA

Haid says despite Assad’s quest for international legitimacy, the use of chemical weapons is strategic for re-taking all of Syria. The government is using both chemical and conventional weapons to push civilians out of some areas, according to Haid, and also to create an environment of fear. “They want to show civilians there is no hope to change the regime. The only hope they have is to make a deal with the regime,” says Haid. “The regime is playing the long game here.”

Meanwhile, residents of Syria like Tennari live in fear of it happening again. He says they they’ve used almost all their supplies of Pralidoxime. “If there will be another attack,” says Tennari, “we won’t have enough of the antidote.” 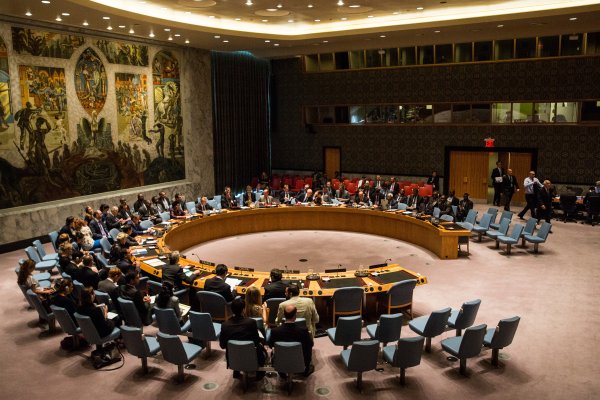