America Should Never Be ‘Great Again’

President Donald Trump leaves the Oval Office of White House to walk to the Residence on April 3, 2017 in Washington, D.C.
Olivier Douliery—Pool/Getty Images
Ideas
By J.M. Opal
Opal is an associate professor at McGill University and the author of Avenging the People: Andrew Jackson, the Rule of Law, and the American Nation from Oxford University Press.

President Donald Trump is different. Unlike any of his forty-four predecessors, he does not even pretend to care about constitutional rules or official protocols. He has no need for facts or norms. And in his drive to “Make America Great Again,” he discards not just the balance of power within our government, but also the deeper balance between our two major myths about what made America great in the first place.

In the end, that might be a good thing.

The first of those stories tells us that America’s greatness comes from its pioneer spirit, and that making society nicer will weaken the nation and embolden its foes. It centers on the frontier, and began with the seventeenth-century Puritans, who saw themselves as children of light, struggling to claim property and bring piety to the “dark wilderness.” A century later, the Protestant Ulstermen, who had already displaced the people of northern Ireland, seized native lands from Pennsylvania to Georgia. They did so believing that they were the tip of civilization’s spear and that the blood they shed washed away their sins. Around 1800, the French Revolution made the United States seem like the only moral country on Earth. Then Andrew Jackson, a slave-owner and businessman of Ulster background, told Americans that they were not just free but also chosen to take more property from new frontiers. Of course, this is a story about white people, and it lingers like a poison in our body politic.

The second story focuses instead on the U.S. Constitution as the starting point for a more lawful society. Among its adherents was Abraham Lincoln, who began his career by condemning the Jacksonians’ wars to expand slavery. (Lincoln was more cautious in attacking slavery itself, which the Constitution implicitly supported.) In this narrative, the Constitution keeps us free by holding our leaders within the law and then expanding it to new groups of Americans, including the non-white victims of the pioneers. Thus President Obama, a Lincoln admirer, urged Americans to “perfect” the Union once again, to carry on the work that the Founders began.

For much of our history, these two narratives fed off each other. The Jackson myth told us that we were already good and lawful, and thus entitled to conquer and expand; the Lincoln tradition cautioned that we had to remain good and lawful by honoring the Constitution. Together they gave Americans a deep sense of innocence — of original virtue and pure intentions, of heroic pasts that held all the answers.

But that ended on January 20, 2017. Now that America’s innocent self-image helped him win, Trump has no more use for the country’s ideals. The only model he has for the nation is the man in his mirror, who does whatever he wants just because he can. He has driven the frontier approach off its constitutional rails, declaring open season on anyone who does not look and think like he does: Most Americans, as it turns out — along with the rest of the world.

The American myth is at a crossroads. Our old stories will not save us. We need a new way to understand ourselves, a more honest account of our troubled past to help us face our troubling future.

This narrative should note that the frontier was a grim and guilty place, dominated by scoundrels and speculators, and that most people much preferred to live in safe, stable communities. Our new story would also give due credit to the Founders’ design, while recognizing that it was only one of many plans to come out of the Revolution. Far from a blueprint for democracy, the Constitution kept real power away from ordinary people while protecting wealthy investors and slave-owners. It had nothing to do with human rights or social equality. In short, our new story would admit that much of our democracy has grown despite the rules and myths of the Founders and the frontier, not because of them.

Freed of those rules and myths, we could finally learn from our own past and from other democracies. We would recognize that constitutions change because nations change. (The French, for their part, are on their fifth republic.) No longer insisting that we have all the answers, we would be less eager to use our war machine and to spend so much of our wealth upon it. More aware of our own sins, we would feel less driven to avenge them abroad.

More profoundly, we could see each other as flawed and vulnerable members of the same society, as civic brothers and sisters who are equally American. No longer dazed by frontier mythologies or blocked by Constitutional rules, we could think boldly and practically about a happier, more caring nation — one based on a new Bill of Rights, perhaps, or even on a new Constitution.

Why not guarantee every single American good health care and schooling, simply because they are American? Why beg faceless corporations to keep jobs here when we could directly employ everyone who wants to make their community greener, safer, more efficient or simply more pleasant? For that matter, why insist that we must always work harder, when most of us want a better balance between work, family and friends? Why tear open new frontiers, when we can take better care of what we already have?

As another Founder once noted, the Earth belongs to the living. Letting go of our mighty fictions is the first step in remembering that. 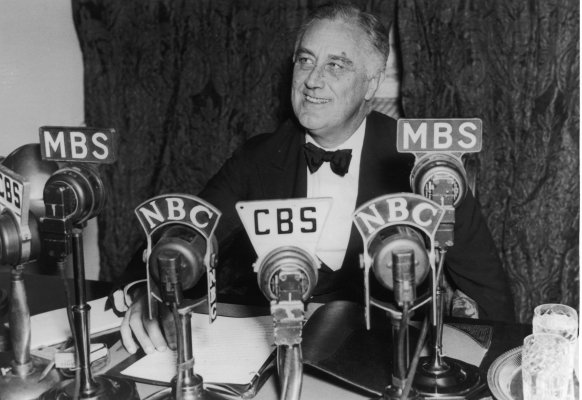 Why Federal Employees Can Thank FDR for Some Restrictions on Their Tweets
Next Up: Editor's Pick