When Oregon Sen. Jeff Merkley began speaking on the Senate floor Tuesday evening, he planned to protest Neil Gorsuch “as long as I’m able.” He didn’t end his speech for more than 15 hours.

Merkley spoke against Gorsuch from 6:46 p.m. Eastern Tuesday to 10:13 am Wednesday. Over the course of the night he spoke about why he doesn’t believe Gorsuch should be confirmed, quoted George Washington and waxed poetic about the state of politics.

“It’s my understanding that the sun is coming up behind the Supreme Court,” he said just after 6 am, The Hill reports. “I was struck by how beautiful the weather was yesterday while the weather inside this building was so dark and gloomy. Partisan politics gave us a very, very ugly setting here.”

Merkley was the first Democrat to say he’d try to block Gorsuch (he announced opposition to Trump’s Supreme Court nominee even before Trump had made his pick). His stemwinder was still nine hours short of the record time: 24 hours and 18 minutes, completed by former South Carolina Sen. Strom Thurmond in 1957 to stall the passage of the Civil Rights Act. Texas Sen. Ted Cruz is the sitting senator with the longest speech: he spoke for 21 hours and 18 minutes in 2013 to protest the Affordable Care Act.

Merkley’s marathon speech wasn’t technically a filibuster, as it didn’t delay anything. Democrats will mount their filibuster on Thursday when they are expected to raise the necessary votes to deny cloture, which ends debate.

Republicans have said they’ll trigger the nuclear option and change Senate rules to overcome the filibuster, so Gorsuch is expected to be confirmed Friday, despite Merkley’s endurance and the Democrats’ votes. 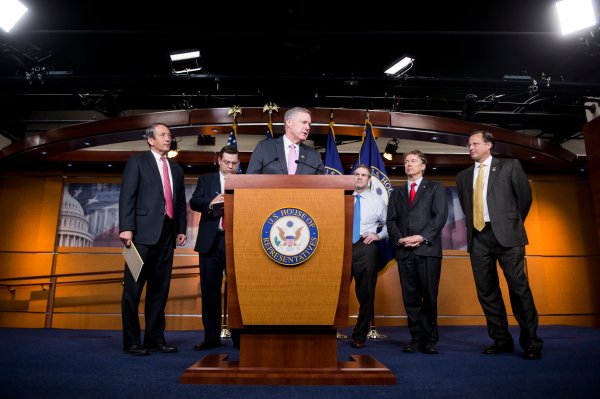 How the Revised Health-Care Bill Would Work
Next Up: Editor's Pick