These Are the Best Times to Use the Airplane Restroom, According to a Flight Attendant

When nature calls, there are few worse places to be than 30,000 feet in the sky. But for passengers on a long-haul flight, it’s impossible to avoid the airplane bathroom.

But, according to one expert, travelers looking for a more private trip to the toilet should take advantage of two golden windows of opportunity.

Erika Roth, a former flight attendant, told Mel Magazine that passengers looking for a little more privacy while they’re on the plane can visit the toilet without worrying about anyone waiting outside the door as soon as the pilot turns off the seatbelt sign and just before drink service begins.

During those times, passengers can realistically expect about 10 minutes of peace inside of the restroom to take care of any pressing issues. But after 20 minutes she warned that a flight attendant may come and knock on the door.

For those who know in advance that they will be taking care of foul business in the airport bathroom, Roth had one veteran tip: “Ask an attendant for packets of coffee grounds, then hang them up in the lavatory,” she said. “The grounds will soak up the odor.”

Although flight attendants will know exactly what you’re about to do, those who use the bathroom afterwards will be none the wiser.

And, more than just being a courtesy to fellow passengers, the coffee grounds trick could save a flight from emergency diversion. Earlier this month, a SpiceJet flight was forced to make an emergency landing due to an “unbearable” smell coming out of the bathroom and into the cockpit. 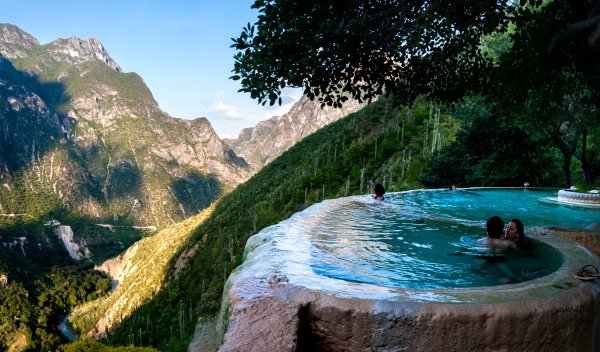 You Can Relax in a Hot Spring Infinity Pool Overlooking Volcanic Mountains
Next Up: Editor's Pick