Here's Why So Many People Have Heart Attacks at the Gym

When Don Stenta turned 50 last January, he decided to start working out more and train for a half-marathon. As director of Student Life Recreational Sports for Ohio State University, Stenta oversees six fitness and recreation centers on campus, and began going for regular runs on the school’s indoor track.

One day after a run, Stenta collapsed—and woke up later in the hospital. He’d gone into cardiac arrest on the track, and two quick-thinking student employees had used one of the facility’s automated external defibrillator (AED) devices to restart his heart. They also performed CPR on Stenta until paramedics arrived.

Afterward, doctors determined that Stenta had a 95% blockage in his left anterior descending (LAD) artery—often called the “widowmaker” artery because blockages here are almost always fatal. They can also happen without warning.

“I’m the kind of person who always carries around 20 extra pounds, and I have a family history of heart problems in old age,” Stenta says. “But I’ve always had normal blood pressure and normal cholesterol, and I didn’t think I was in danger this young.” Looking back, he says he’d recently been feeling dizzy and tired while working out, but didn’t think it was anything to be worried about.

Thanks to his employees’ CPR and AED training (something all student managers in Ohio State’s recreational sports department are required to have), Stenta suffered no permanent heart damage. After a few months of rehab, he was back to his normal routine.

“I’m of the mindset that AEDs need to be in as many public places as possible, because they really do save lives,” says Stenta. “It’s just a matter of seconds and minutes that makes a huge difference.”

Why AEDs are so important in gyms

Although regular exercise helps strengthen the heart and lowers the risk of cardiovascular problems long-term, strenuous exertion does increase immediate risk for heart attack and sudden cardiac arrest. That’s especially true for people who are already at higher-than-normal risk, either because of lifestyle or genetic factors.

Young and healthy people are less likely to have heart problems while exercising, but they can still happen. In February, celebrity trainer Bob Harper, a famously fit CrossFitter, suffered a “widowmaker” heart attack and went into cardiac arrest at his gym. (Harper, 51, says his mother died from a heart attack and that genetics likely played a role in his, as well. And like Stenta, Harper says he was having dizzy spells leading up to his collapse.)

Harper was also saved by bystanders who performed CPR and used the gym’s AED. “I will never ever walk into a gym again that doesn’t have CPR, people that know their CPR, and there’s an AED somewhere in that gym,” the trainer said on Today.

According to the American Heart Association, more than 350,000 people suffer out-of-hospital cardiac arrests each year throughout the United States. And many of these events happen while people are working out: A 2013 study in the Journal of the American College of Cardiology found that 136 (or about 16%) of 849 public, indoor sudden cardiac arrests reported over a 12-year period in and around Seattle occurred at either traditional or non-traditional exercise facilities.

In their paper, the study authors note that AEDs are more prevalent at fitness centers than at other locations—and that they are likely responsible, at least in part, for these improved chances. These devices, usually contained in a small portable box, include electric sensors that can be used to shock a person’s heart back into rhythm if it has stopped or is beating irregularly.

Health experts advocate for widespread placement of AEDs in public places, but there are no federal laws requiring the devices in specific locations. That’s why it’s important to see if you can spot one at your gym, says American College of Cardiology President Dr. Mary Norine Walsh—or ask the staff exactly where it’s located, if not.

Small gyms and non-traditional workout venues are less likely to have AEDs, but some people might want to consider getting one if they’ll be exercising regularly in a specific location. “It should depend on your individual risk factors and personal preference,” says Walsh. “Maybe a group of younger individuals might not consider it, whereas a more middle-age group of amateur athletes might think about it more carefully.”

Most AEDs cost between $1,500 and $2,000, according to the American Heart Association, and may require a doctor’s prescription to purchase. A local EMS department can provide information about state and local protocols and requirements.

How to operate an AED

AEDs include step-by-step instructions and voice prompts, and are meant to be used by untrained bystanders. Anyone who witnesses a person collapse can operate an AED, as long as it’s confirmed that the unconscious person’s breathing and pulse are absent or irregular.

Before using the AED, bystanders should call 911 so paramedics can be dispatched. If the AED isn’t immediately available, one person should begin CPR and a second person should run to get the closest one. Users should check for puddles of water or move the unconscious person to a dry area before operating the device.

The device will instruct users to expose the person’s chest and attach sticky pads with electric sensors to it. The machine uses these sensors to analyze heart rhythm, and, if needed, will let users know to press a button to deliver an electric shock.

After giving a shock, the machine will instruct users to perform CPR until emergency medical help arrives, or may prompt them to deliver another shock two minutes later.

“They’re user-friendly and easily taken off the wall or from their location, and they definitely save lives when used in time,” says Walsh. “But it’s very important to be familiar with them in general, and to know where exactly you can find them in an emergency.”

How else can gym-goers protect themselves?

Walsh stresses that physical exercise remains one of the best ways to lower heart disease risk overall—and that while exercise-induced cardiac arrest can happen to anyone, rates among young and healthy people remain very low.

Even when it does happen, outcomes are often better. In a 2013 study from the European Heart Journal, 46% of exercise-related cardiac arrest victims survived, compared to just 17% of victims whose cardiac arrest wasn’t exercise-related—even after results were adjusted to account for age, location, and rates of CPR and AED use.

“The message here is that we need to know our own risk factors for cardiovascular disease and have those addressed by a trusted physician,” says Walsh. “Exercise, in general, is a good thing, but we can’t always predict every single cardiac event.”

That’s also why it’s important to not only know how to use an AED, Walsh says, but to know how to perform CPR as well—so you can be prepared to help whether a defibrillator is available or not. (CPR alone can’t revive someone from cardiac arrest, but it can keep them alive until an ambulance arrives and can provide a shock.)

Taking a CPR certification course is always a good idea, says Walsh, and CPR should be performed by a certified person whenever possible. But in the event of an emergency, she says, “you should not let lack of training stop you from attempting to save someone’s life.” 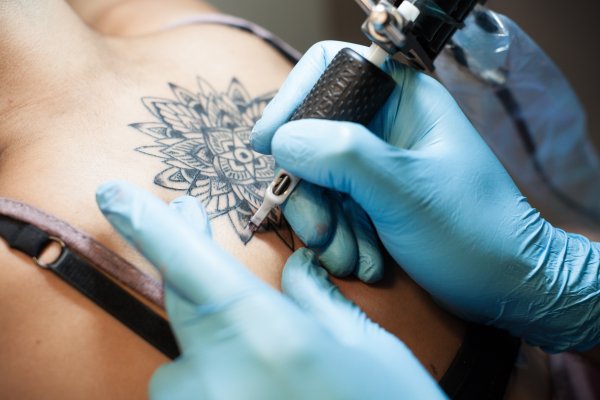 You Asked: Are Tattoos Bad For You?
Next Up: Editor's Pick