British Foreign Secretary Boris Johnson said Wednesday that the regime of Syrian President Bashar Assad should not be allowed to remain in power after the country’s six-year civil conflict comes to an end.

Johnson met with European counterparts in Brussels one day after the Syrian government was accused of carrying out a chemical attack that activists say killed dozens of civilians in a rebel-held town in the country’s northeastern Idlib province, Reuters reports.

“This is a barbaric regime that has made it impossible for us to imagine them continuing to be an authority over the people of Syria after this conflict is over,” Johnson said, adding that the recent attack “will need to be investigated” and justice pursued.

Johnson said that “all the evidence” he had seen pertaining to the attack suggests that it was “the Assad regime who did it in the full knowledge that they were using illegal weapons in a barbaric attack on their own people,” according to the Associated Press.

Read More: ‘They Are Dying’: The Moments After a Gas Attack in Syria

Russia’s defense ministry said in a statement early Wednesday that the chemical exposure was caused by a rebel-operated arsenal that was hit during an airstrike by Syrian forces, AP reports, claiming that the facility had produced weapons previously used in Iraq.

Both Syria and Russia, which supports the Assad government, have denied the use of chemical weapons in Tuesday’s attack, which activist groups say killed at least 72 people, including 20 children. Images of civilians struggling to breathe amid the rubble went viral online and caused immediate international outcry over what appears to have been the deadliest attack of its kind to occur in Syria for several years.

The U.S., Britain and France jointly called Wednesday for the U.N. to condemn the attack, in a draft resolution placing the blame directly on Assad’s government and calling on them to hand over all relevant military logs for an investigation.

Just hours before the attack, U.S. Ambassador to the U.N. Nikki Haley told reporters that while she views Assad as a “war criminal,” the United States will not seek a regime change in war-torn Syria because the government may need him in the war against the Islamic State. 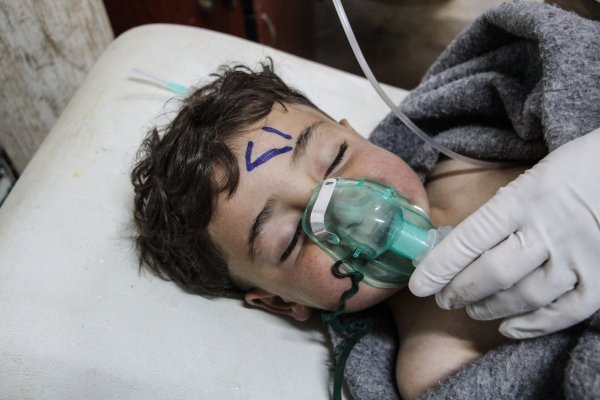 'They Are Dying': The Moments After a Gas Attack in Syria
Next Up: Editor's Pick