Why President Trump Could Never Go It Alone on North Korea

North Korea’s nuclear program will be high on the agenda when President Donald Trump meets Chinese President Xi Jinping in Florida on Thursday. The U.S. President says Beijing has not done enough to bridle the regime’s aggressive behavior, and on Wednesday Supreme Leader Kim Jong Un gave a perfect illustration: firing another ballistic missile into the Sea of Japan.

In response, U.S. Secretary of State Rex Tillerson released an extraordinary statement, saying, “The U.S. has spoken enough about North Korea. We have no further comment.” This came after Trump told the U.K.’s Financial Times last week that the U.S. would consider unilateral action against North Korea if China refused to help.

“Well, if China is not going to solve North Korea, we will,” he said. Asked whether the U.S. could tackle North Korea “one on one,” Trump was emphatic: “Totally.”

During his visit to East Asia last month, Tillerson had already raised the temperature by insisting that military action remained “on the table.” In response, a Pyongyang spokesperson warned of “a preemptive nuclear attack … if the U.S. shows even the slightest sign of a preemptive attack on the DPRK [North Korea].”

“Both sides are playing with fire,” says John Delury, an East Asia expert at Yonsei University in Seoul. “They are both talking about these preemptive, preemptive strikes. It’s almost silly, but it’s not silly as there are assets on hair-trigger alert. That’s a real danger if Trump makes it a permanent part of North Korea policy to threaten a surprise attack.”

File footage of a North Korean missile launch, at a railway station in Seoul on April 5, 2017
Jung Yeon-Je—AFP/Getty Images

But while Trump prepares to up pressure on Xi at Mar-a-Lago, something arguably more significant for future North Korea containment strategy has unfolded 7,500 miles away in Seoul. On Monday, Moon Jae-in received the liberal Democratic Party of Korea’s nomination for South Korea’s presidential election on May 9.

The 64-year-old former human-rights lawyer is currently 10 points clear in the polls. He is opposed to the policy of isolation and pressure employed by former President Park Geun-hye, who was impeached in December and now faces criminal charges for corruption. Instead, Moon advocates measured re-engagement with the Kim regime. He wants the joint Kaesong Industrial Zone reopened and renewed cultural exchanges across the DMZ. He has also suggested that deployment of the U.S. THAAD missile-defense system in South Korea should be put under review.

“The return of liberals to Seoul undermines Trump’s apparent move to rely on pressure and sanctions,” says Delury. “It’s at odds with what Trump wants to do.”

Moon is not an apologist for North Korea, but is acutely aware that the past decade of isolation and sanctions has not achieved its desired goal. For South Korea, a lower temperature on the peninsula makes the nation immediately safer, given they are already within reach of both North Korea’s conventional and nuclear weapons.

A review of THAAD would also release some of the economic pressure China has been putting on South Korea — reducing tourist numbers and closing Chinese branches of South Korean shops — at a time when the latter’s economy is struggling. (Beijing deems THAAD part of an American strategy of containment.) “China has the rare distinction of employing economic coercion on both North and South Korea,” says John Park, director of the Korea Working Group at the Harvard Kennedy School.

The election of Moon would be a boon to Beijing, which has always favored dialogue and engagement with North Korea, and leave Washington diplomatically isolated. The Obama Administration had worked hard with former President Park to convince China that sanctions were the correct response to North Korea’s nuclear program, and Beijing even joined onto unprecedented U.N. sanctions in March last year. But North Korea’s nuclear and missile tests have continued nonetheless.

“Even when you get China to do big things North Korea doesn’t fold,” says Delury. “They just keep developing their nuclear capabilities, if anything, with greater resolve.”

Beijing has always favored restarting the six-party denuclearization talks — comprising North and South Korea, Japan, Russia, China and the U.S. — which ran from 2003 to 2009 before being nixed by Kim Jong Un’s father, Kim Jong Il. Russia is already re-engaging with the regime economically despite signing up to recent sanctions.

“There’s a rational pendulum,” says Adam Cathcart, a North Korea expert at Leeds University in the U.K. “They’ve tried to turn the screws on North Korea, and they are likely to swing back to see what they can get out of a more engagement-orientated approach.”

“That really rattled the establishment there,” says Harvard’s Park. “Japan feels the existential threat more than any other country. They are bracing for the possibility of this turning kinetic.”

Civilian evacuation drills were held in Japan for the first time last month, and there are growing calls to amend the nation’s pacifist constitution to allow for a preemptive strike against North Korea. “Japan can’t just wait until it’s destroyed,” Hiroshi Imazu, the head of the ruling Liberal Democratic Party’s security committee, recently told the Washington Post.

Read More: President Trump Will Warn China That ‘the Clock Has Now Run Out’ on North Korea

Experts say an attack against North Korea could destroy much of its nuclear-enrichment and missile-testing facilities. However, the South Korean capital — just 30 miles from the DMZ, whose environs are home to half of the 50 million national population — would face a devastating retaliation. There are also 28,000 American troops stationed in South Korea and 50,000 in Japan. “North Korea’s heavy artillery and rocketry cannot be destroyed in time to save Seoul from a fire bath,” says Carlyle Thayer, emeritus professor at the Australian Defence Force Academy.

Moreover, following the poisoning of Kim Jong Nam — half-brother of Kim Jong Un — with VX nerve at Kuala Lumpur Airport in February, one cannot rule out biological warfare being used by the North Koreans. Even with Japanese approval, which is still a very slight possibility, these very real risks are why the military option has always been a last resort — and why unilateral action could never be simply that.

“There’s literally no such thing as ‘going it alone’ on the Korean peninsular; you cannot do it,” says Cathcart. “It betrays an ignorance of the whole situation.” 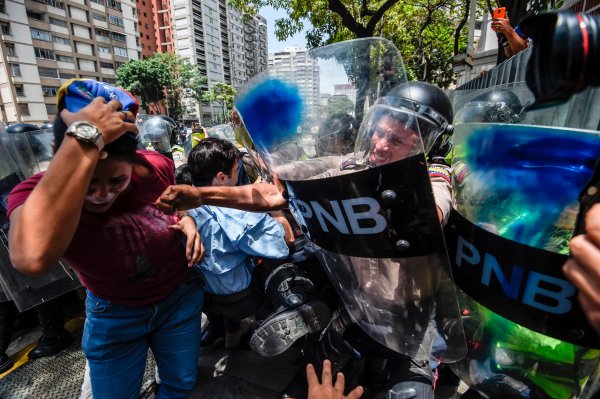