President Donald Trump will press Chinese President Xi Jinping to take a far tougher stance against North Korea over the rogue state’s nuclear program when the two meet later this week in Florida, warning that the U.S. reserves the right to act unilaterally.

Previewing the visit, senior White House officials warned that the North Korea threat is now “urgent,” as that country works to simultaneously miniaturize its nuclear weapons and improve its ballistic missile technology. North Korea has been the subject of an interagency review since Trump took office. U.S. intelligence officials believe it will have the ability to reach the U.S. with a nuclear missile within a year at its current pace, and former President Barack Obama warned his successor of the escalating danger before he left office.

“The clock has now run out and all options are on the table for us,” a senior White House official said, providing a glimpse at Trump’s message to Xi.

Roughly 90% of the isolated nation’s trade is with China, and Trump will call on Xi to increase its compliance with United Nations sanctions against North Korea. “We hear sometimes that China’s political influence may have diminished with North Korea,” the official said. “Clearly its economic leverage has not.” The official would not rule out the application of secondary sanctions on Chinese entities that trade with North Korea in violation of UN and U.S. sanctions.

“The best outcome would be one in which China very thoroughly implements those UN sanctions and resolutions,” the official said. “That is really what we’re working toward.”

As for what Trump will do if China doesn’t act, the senior White House official demurred. “[Trump] is not someone who wants to broadcast all of the ins and outs of his strategy in advance,” the official said, ” but I think he’ll be sending a clear signal.”

Xi is expected to protest the U.S. deployment of the THAAD anti-missile system to South Korea, which China views as a strategic threat. Trump is expected to reject those concerns. “The United States will always act to defend our allies and defend our homeland,” the official said.

Trump invited Xi to visit him at his Mar-a-Lago club for a roughly 24-hour get-to-know-you session, where officials said the focus would be on forming a personal relationship and crafting a framework for future talks. Trump “really views this meeting as the first step toward building a constructive and results-oriented relationship,” the official said. The pair, the official said, will not be playing golf, but will sit through an informal dinner Thursday night and a working lunch together Friday.

Trump is expected to raise the issue of the U.S. trade imbalance with China, a second White House official said, operating under the belief that “bilateral trade and investment should be mutually beneficial.” The White House would not say whether Trump would bring up the issue of Chinese currency manipulation. As a candidate, Trump promised to designate China a currency manipulator on his first day in office, though he has since backed down amid concerns from senior aides that it would spark a trade war.

The President is also expected to raise concern about continued Chinese development in the South China Sea, where China has built up artificial islands and claimed vast swaths of waters for its exclusive use in contravention of international law. “The United States certainly will continue to fly and sail where international law allows,” the first official said.

Trump, who once toyed with making the U.S.’s “One China” policy contingent on new trade negotiations with the mainland, has fully embraced the longstanding U.S. viewpoint with regard to Taiwan. “That is longstanding policy of the United States and that is a policy that the president has reaffirmed,” the first official said. 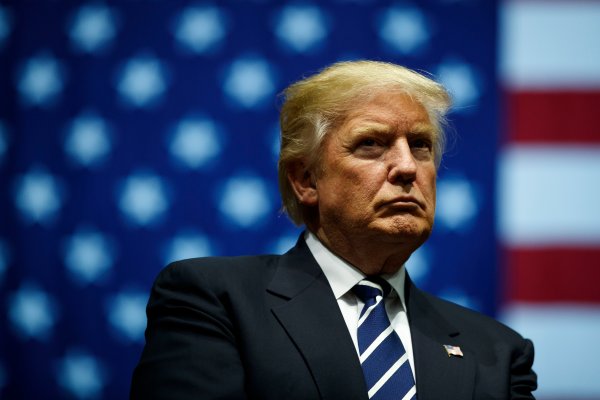