April 4 is a major holiday: it’s Beyoncé and Jay Z’s wedding anniversary, of course. This year, the Queen and her consort celebrate nine iconic years together as music’s reigning power couple. To mark the occasion, Bey herself shared an updated music video for the spare, romantic ballad “Die With You,” a song she originally released on their anniversary two years ago.

The video is a compilation of low-fi home video clips of the loved-up duo, showcasing their seemingly picture-perfect relationship, all memory of Lemonade stripped away. It’s available in its full form exclusively on Tidal—that’s Jay Z’s music streaming platform, after all.

“I don’t have any reason to cry, and I have every reason to smile,” the lyrics start off. That seems like a fair statement on their current status: 2017 promises to be especially fruitful for the couple, given that they’re expecting twins this summer.

Queen Bey also took the time to share an extensive playlist made just for Jay, titled “IV Ever Ever.” The song collection tactfully eschews works from Beyoncé or Jay Z’s own oeuvres, instead featuring romantic tunes from artists like D’Angelo, Sade, Marvin Gaye, Frank Sinatra, and Coldplay (“Fix You” is apparently a classic for Beyoncé, too). In what seems like a nod to Bey and Jay’s early days together, there’s even a “Bonnie and Clyde” song from Brigitte Bardot and Serge Gainsbourg.

Check out a clip of the video and the full playlist, below. 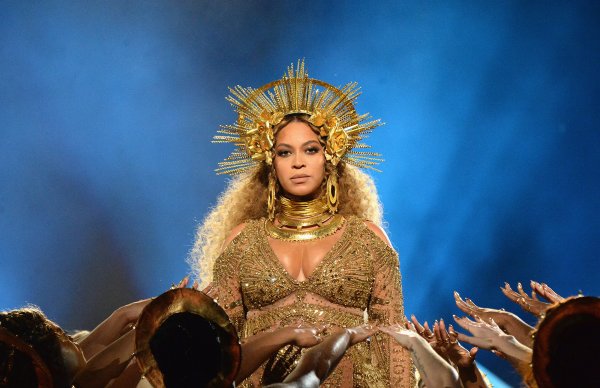 Apparently Beyoncé's Social Media Posts Are Worth More Than a Million Bucks
Next Up: Editor's Pick