Republicans Will Win the Fight Over Neil Gorsuch. Some Worry They Will Regret It

In all likelihood, Neil Gorsuch will be confirmed to the Supreme Court later this week. But senators from both parties fear that the fight to put him there will dramatically change the upper chamber and the court.

To overcome a threatened filibuster, Republicans will need to trigger the so-called nuclear option to change Senate rules, allowing Gorsuch to be seated with a simple majority.

But some warn that will erode important traditions in the Senate while also reducing the incentive for presidents to nominate more moderate judges who would receive bipartisan support.

“I believe our actions will haunt us,” Arizona Sen. John McCain of Arizona warned on the Senate floor Wednesday. “We will see more and more nominees from the extremes of both left and right.”

Sarah Binder, a professor at George Washington University who specializes in Congress, says that the rule change is symptomatic of a Congress that has become increasingly divided along partisan lines.

“This is part and parcel of a longer term partisan and parliamentary arms race between the two political parties in the Senate,” she said. “It’s just another notch, another step forward in turning the Senate into a much stronger majority rule institution. … There’s only an incentive to stop it if senators think about the future.”

Other Republican senators were also worried about the long-term effects.

“I think that is truly tragic,” Republican Sen. Susan Collins of Maine said. “It gets bad for the Senate as an institution, and I think it is bad for the court, as well.”

Not everyone is convinced. Some experts note that since filibusters haven’t historically been used on Supreme Court nominations, doing away with them won’t change how this process actually works. There has been potential to attempt one, but it was rarely used and hardly a factor in the reality of the appointments. (Abe Fortas was subject to a bipartisan filibuster in 1968. Most recently, a cloture vote was called on Samuel Alito’s nomination in 2006, but he easily overcame it.)

“The concern would be better placed if there was a long history of filibusters on [Supreme Court] nominations that had demonstrably led to certain nominations not being made,” said Martin Gold, a partner with Capitol Counsel LLC and the author of Senate Procedure and Practice. “I don’t think [the filibuster] has had a moderating influence at all.”

The filibuster has already been scrapped for lower court nominations and executive appointments, thanks to then-Democratic Majority Leader Harry Reid in 2013. Many of the Republicans who decried the rule change then and now plan to vote for it anyway, because they feel they’ve been backed into a corner by the Democrats set to pull off the first-ever partisan filibuster of a Supreme Court nominee.

“I guarantee you, just as the Democrats regretted what Harry Reid did, we will regret doing this,” McCain said. “I have no choice. Because we need to confirm Gorsuch.”

Leonard Leo, an adviser to President Trump on this process, also blamed Democrats.

Senate Minority Leader Chuck Schumer rejects this argument, placing the blame ultimately on Republicans rather than on his own caucus’s decision to filibuster.

“No one is making our Republican colleagues change the rules,” he said on the floor Tuesday. “Senator McConnell and my Republican colleagues are completely free actors and making a choice, a very bad one in our opinion.” And he warned later that day that Republicans risk tarnishing their image in this fight: “They will lose if they do it,” he said. “It will be symbolized to the American people that Mitch McConnell will do anything, anything, even hurting the Senate, to get his people on the court.”

To be sure, on a short-term strategic level, deploying the nuclear option is a good thing for Republicans, who will have an easier time confirming any future Supreme Court openings under President Trump.

But neither political party can count on being in the majority forever, and at its core, abolishing the filibuster curbs minority power.

“The big risk here is that every time the Senate goes nuclear, it lowers the political cost,” said Binder. “It makes it easier for the next majority to go nuclear over something else.”

In 2013 when Reid first used the nuclear option, Republican South Dakota Sen. John Thune told TIME, “I think Democrats are playing with fire. This is very dangerous in terms of what it means for the Senate. What goes around comes around, and someday they’re going to be in the minority.”

Now it has come around, with Republicans temporarily in control. And it seems the only thing about Gorsuch’s confirmation process that’s bipartisan is a sense of regret about the state of the Senate. 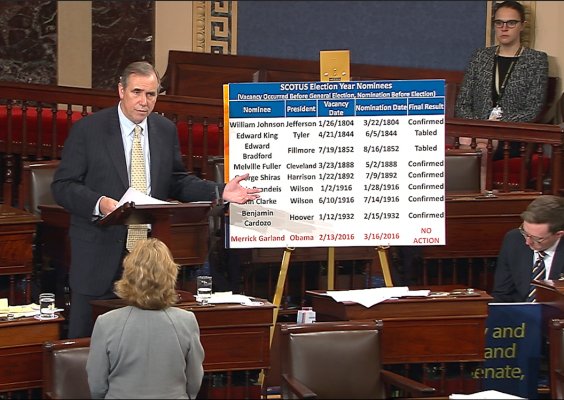