Ivanka Trump’s neighbor, Dianne Bruce, woke up on Tuesday to find photos of herself in a fur coat and drinking wine all over the internet.

The photograph of Bruce was taken at a recent “queer dance party” held outside Trump’s home with husband Jared Kushner in Washington, D.C. LGBTQ protesters planned the event after President Trump signed a sweeping executive order to shift the direction of U.S. environmental policy, essentially rolling back Obama-era regulations. The invite read “shake what your Mamma Earth gave ya and WERK it for climate justice!”

When Bruce heard the crowd marching down her street, she grabbed her fur coat off the bannister and set out with her husband to enjoy the festivities.

“It was the entertainment for Saturday night,” she told TIME, explaining that she threw on the outerwear because it was chilly, thinking nothing of it. “A neighbor had a couple of glasses of wine, and we were standing so they gave us one as neighbors do, and at the end I gave her back her glass.”

Bruce views the demonstration as par for the course in the political capital. She was not, as some of Trump’s detractors suspected, enjoying some schadenfreude about protests of her neighbor.

“People are reading into it as a statement,” she said. “For me, it was people who had something to say, and saying it the way we do in America, with a peaceful march.”

Bruce, who has lived in the house across from her new neighbors for twenty years, described the party as fun and filled with music.

“It was about people getting everyone together because they feel frustrated, and they all had big smiles on their faces. It was a celebration of freedom really and truly,” she said. “I was happy as a clam we were there.”

Bruce recently participated in her first protest when she hired a bus for the Women’s March on Washington, what is now considered the largest single-day demonstration in the U.S.

“I felt so so so strongly that women’s voices were just not being heard and we had to do something,” she said.

A Democrat who says she has Republican friends, Bruce said that she is not a fan of the fluorescent signs reading “don’t come near” in English and Spanish outside Trump’s home.

“When the Obamas came, it was very quietly.” She said that the neighborhood is mostly made of liberal Democrats, and the Obama family, Trump’s Secretary of State Rex W. Tillerson, and Amazon CEO Jeff Bezos also live nearby. Bruce also lives part-time in London. 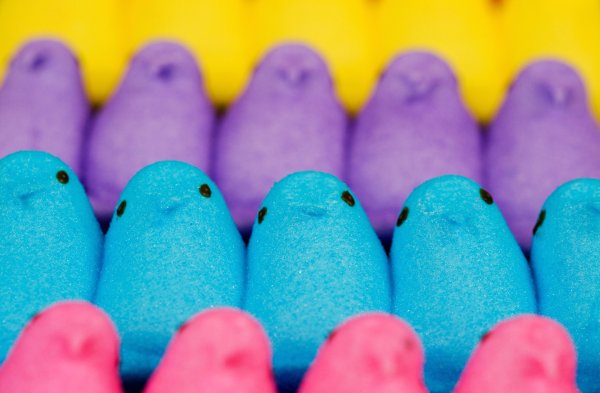 Peeps Pizza Is Now a Thing and the Internet Can't Deal With It
Next Up: Editor's Pick