5 Times When Being Alone Will Improve Your Life

Harris is the author of Solitude: In Pursuit of a Singular Life in a Crowded World, now out from St. Martin’s Press.

Our solitude cannot be monetized. Maybe that’s why it hasn’t been safeguarded while so many forces work to monopolize our hours, to produce an anxious awareness of the thousands of cloud-based connections we’re meant to groom daily.

A recent Nielsen report found that the typical American spends half their waking life looking at one screen or another. It is taking a toll. We are terrified to spend time by ourselves. We demand external stimulus, constant hits of dopamine. A 2014 study found that many of us would rather give ourselves electric shocks than spend 15 minutes alone with our thoughts. Hanging out with yourself, while it may sound torturous to many, has become a radical act.

But you’ll also be rewarded. In fact, those who occasionally ditch their phones (and their friends) find that, while solitude cannot be monetized, it is of value in several parts of their lives.

1. Politics. Americans now receive about as much news via social networks as they do via news websites. But a plurality of voices does not inevitably lead to a plurality of perspectives. Far from it. As Elizabeth Kolbert recently reported, a human simply cannot change his or her mind while under attack — only a person who is confident, comfortable at the time has that ability. We all need time away from the red-faced online crowds if we want to consider the things they’re shouting. The radical thinkers of tomorrow will be people who know how to remove themselves from toxic pools of public discourse; they’ll be people who have mastered the art of moving back and forth, between crowd and solitude.

2. Daydreaming. Yes, daydreams are radical. At school, we’re taught two methods of learning: concentration and collaboration. But educators often ignore a third and equally useful approach: daydreaming. Studies show that, when the mind wanders, our brains activate what’s called a “default mode network.” An intense series of brain functions go to work, despite the “blankness” that the brain projects to us. It’s this default mode that produces spontaneous insights when we’re looking out a window at the rain, or lying in bed staring at the ceiling. While institutions continue to place an emphasis on concentration and collaboration, it’s worth asking why so many of our greatest artists and scientists make a habit of solitary walks in the woods or through city parks. Goethe put it best: “One can be instructed in society, one is inspired only in solitude.”

3. Culture Consumption. Once you spend a portion of each day alone, you start to wonder why you’ve been watching re-runs of Bones for the past two years. Do you really like what the Netflix algorithms told you to like? Online culture-dispensers (Amazon, iTunes, Vimeo) have exacerbated the winner-takes-all effect that already plagued global markets. Despite the zillions of books, films and songs available to us online, studies show we increasingly devote our time and money to blockbusters and little else. Consider films alone: In 1997, the top 10% of movies took home half the total revenue; today, they take home about 90%. Meanwhile, over at Amazon, we look for a new read and are ushered toward Harry Potter adult coloring books. We owe it to ourselves to step away from these crowd-fueled suggestions and foster our inner weirdos instead. What do you really like? There are stranger things waiting to be loved.

4. Wayfinding. University of Oregon Professor of Geography Amy Lobben told me she sees “navigation zombies” when she looks out her office window. These are the kids tethered to Google Maps as they make their way through the world. We’ve all learned to rely on the safety of GPS, the dulcet tones of Siri’s step-by-step directions. But getting lost, feeling wholly alone in an unforgiving landscape, might be better for us than we think. As Lobben told me, “Wayfinding is inherently human. It is so important to everyday existence and is probably key to human evolution.” Without a sturdy ability to navigate new landscapes, our ancestors would have perished before they had the chance to pass on their genes. Our fear of relying on individual wayfinding abilities now keeps us from developing that elemental skill. Try taking a drive in a strange town without your phone. Try walking into the woods alone. When we get lost, we have a chance to find ourselves.

5. Relationships. We cannot desire that which we already possess. Three-dimensional love must include periods of separation: as Rilke noted, “the highest task for a bond between two people [is] that each protects the solitude of the other.” Ideally, we travel alone, we commute alone, we walk the dog alone — and in those snacks of solitude, we reminisce about our partners, learning to love them better. That’s not where things are headed, though: Interviews with heads of online dating sites (OkCupid, Plenty of Fish) have convinced me that mobile technologies will push us toward a state of constant, careless affection. The lovers of tomorrow will demand constant reassurance, and a hail of micro-messaging will produce neither the connection nor the disconnection that we need. Walking away from our phones, resisting the urge to Facebook-stalk our boyfriends and girlfriends, composing a single love letter instead of a hundred inconsequential texts, will shake up a relationship more than any “disruptive” technology. 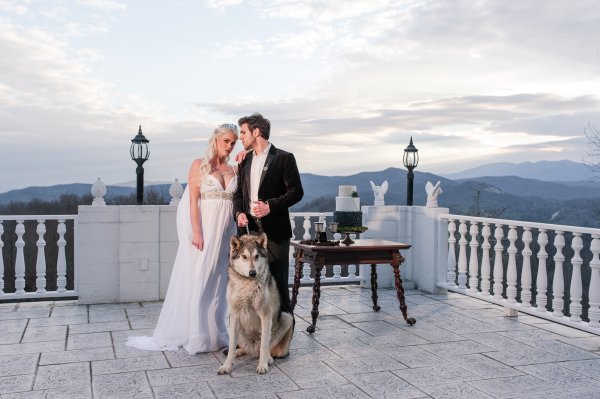 This 'Game of Thrones' Wedding Would Make Cersei Jealous
Next Up: Editor's Pick