PixelBay—Getty Images
By Olivia B. Waxman

Ben & Jerry’s locations nationwide are treating customers to a free cone on Tuesday. The publicity stunt, aptly known as “Free Cone Day,” has become an annual tradition since the Vermont-based company hosted the first one in Burlington in 1979.

Part of the reason why Ben & Jerry’s has become a household name is thanks to its inventive flavors (and their wacky names), but the company by no means invented out-of-the-ordinary ice cream flavors. When Thomas Jefferson penned the first known ice cream recipe recorded by an American it was a recipe for vanilla — dating back to some point between 1784 and 1789 — but, throughout the 19th century, chefs churned out recipes for flavors like parmesan cheese, oyster, pumpernickel rye bread, asparagus, chestnut and truffle. Perhaps predictably, these kinds of flavors were usually dished out to well-to-do patrons of high-end restaurants, like New York City’s Delmonico’s.

But one of the most significant and most surprising flavors in the history of ice cream can be traced back to a shift in the way the treat has been marketed — from a health food to junk food that should only be eaten on special occasions like Free Cone Day. In fact, many early ice cream treats would have been masking the bitter taste of medicine.

A predecessor to the Ben & Jerry-style scoop shop was the drug-store soda fountain, which, in the mid-to-late 19th century and early 20th century, would dish out soda water spiked with drugs not considered medicinal at all today — such as arsenic, cocaine and strychnine. (A 1902 Los Angeles Times article boasted the headline “They Thirst for Cocaine” alongside a photo of soda fountain customers.) At some point in the late 19th century, ice cream was scooped into the soda drinks, but no one seems to know, or can agree on, when, according to Amy Ettinger, author of the upcoming book that traces the history of ice cream called Sweet Spot: An Ice Cream Binge Across America. Soda fountain concoctions made up of a carbonated liquid and ice cream made the medicine taste sweeter, according to Darcy O’Neil, a historian of American drinking who wrote Fix the Pumps, a history of soda fountains.

Ice cream was, then, considered a health food too. An ad printed in the July 27, 1921, issue of The Evening Missourian urged readers to “Eat a Dish of Ice Cream Every Day” by arguing that “one quart contains the same amount of protein as half a dozen eggs or two pounds of beefsteak.”

Amid the crackdown on drugs and alcohol in the early part of the 20th century, temperance-movement activists began pushing the idea of going out to have ice cream sundaes and milkshakes instead drinking at saloons. While soda fountains were able to get away with serving whiskey for medicinal purposes, the temperance activists helped foster the wholesome image of eating ice cream — an image that has endured, even as a new breed of headline-worthy flavors might sometimes disappoint the treat’s original boosters. 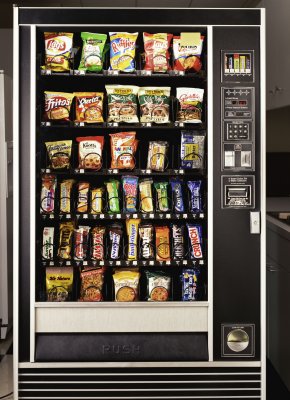 The Trick to Picking Healthier Snacks: A 25-Second Delay on Vending Machines
Next Up: Editor's Pick