U.S. Vice President Mike Pence, right, and his wife Karen Pence are introduced at the the AIPAC 2017 Convention on March 26, 2017, in Washington, D.C.
Noam Galai—Getty Images
Ideas
By Glennon Doyle Melton with Amanda Doyle
Melton is the author of Love Warrior, founder of nonprofit Together Rising and creator of Momastery. Doyle is her sister.

Vice President Mike Pence will not dine with a woman without his wife present, a form of what evangelicals call the “Billy Graham rule.” Graham, a well-known evangelical minister, famously refused to meet with a woman alone other than his wife — not even in an elevator — in order to “flee youthful lusts” and avoid “appearances of compromise or suspicion.”

I am a Christian, a feminist and a woman currently planning my wedding to another woman. As governor of Indiana, Pence presided over a (failed) so-called religious-freedom bill that would have allowed discrimination against couples like me and my future wife. Pence has had plenty to say about rules that should apply to my marriage, and I think it’s fair to examine the ones he applies to his.

First of all, I reject the notion that Pence’s rule is purely personal. Pence’s rule for his marriage perpetuates religious and political ideologies based on false, dehumanizing ideologies about women that, when espoused by those in power, have manifested disastrous outcomes for all of us. If Pence cannot eat alone with a woman, it must be because when he sees a woman across a table, she’s not an adviser, she’s not a teacher, she’s not a leader, she’s not a constituent — she is only a sexual entity.

Growing up Catholic (Pence identifies as an evangelical Catholic), I learned the biblical creation story this way, the same way I heard it in the early part of my adulthood in the evangelical church: God created man. Man was lonely, so God created woman from man’s body. Then, woman tempted man and he fell from grace and was separated from God forever. As it was with Eve in the garden, so, apparently, it is at a lunch meeting. Or at the Vice President’s office in the West Wing.

When Pence says he will not eat alone with a woman who is not his wife, he is perpetuating the patriarchal notion that women are either Mary, Jesus’ pure virgin Mother, or Eve, a temptress, a liability. It perhaps is no coincidence that Pence reportedly refers to his Mary — wife Karen Pence — as “Mother.”

For Pence and many evangelical men, all women who are not Marys are Eves, placed peripherally in their lives as temptations to resist. Every Eve is one alone-meeting away from destroying a godly man. In order to protect their honor and reputation, these men cut us off completely. This reduces all women to a monolithic sexual identity. To men like Pence, we are not complex, complete, sacred vessels full of intellect and divinity and grit. We are not fully formed spiritual beings; we are not fully formed citizens. We are exclusively sexual creatures. This mistrust of women is pumped through the veins of the Christian church and, apparently, the executive branch of the United States of America.

Read: What the Bible Says About Sex, Passion and True Love

When Pence accepted the nomination as Trump’s Vice President, many thought the two a strange match. Pence, the proverbial Boy Scout, was seen as a foil to Trump, the literal Playboy cover model and regular Howard Stern guest. But from a Christian feminist perspective, the two are not a contradiction: if one feels that women are so wholly and exclusively sexual that they must be avoided at all costs, and the other feels that women are so wholly sexually available that they may be grabbed freely, then those two are cut from the same misogynist cloth.

If it feels like we are going back in time, perhaps it’s because rules like Pence’s invite us back to 18th century political ideology — and one of the oldest tricks in the patriarchal playbook — of separate spheres. Separate spheres based on purported natural makeup and the will of God, that a man’s place is in the public sphere (politics, commerce, the economy and law) while a woman’s God-ordained role is in the private sphere (housekeeping, child-rearing and domestic duties). This ideology historically justified women’s legal status as dependents until marriage, and stripped women of their legal existence — economic and property rights — after marriage.

Likewise, the inevitable consequence of Pence’s rule is to preserve and pass down men’s power to other men. If powerful men are free to meet alone with other men, and to exclude women from the most powerful rooms in the country — how will women ever occupy those rooms in their own right? If powerful men are only able to mentor young men, where does that leave young women? If, as data suggests, the most mutually beneficial negotiations take place over meals, then doesn’t denying a woman the opportunity to break bread equate to denying her the opportunity to close a deal — to be heard? Access is power; access denied is power denied.

Jesus himself deliberately sought out women with whom to meet alone, including the most scandalous women of his day. Remember the woman at the well, Vice President? Jesus met with her because that was part of His job on earth. Meeting with women is part of yours too.

Melton is the author of Love Warrior, founder of nonprofit Together Rising and creator of Momastery. Doyle is her sister. 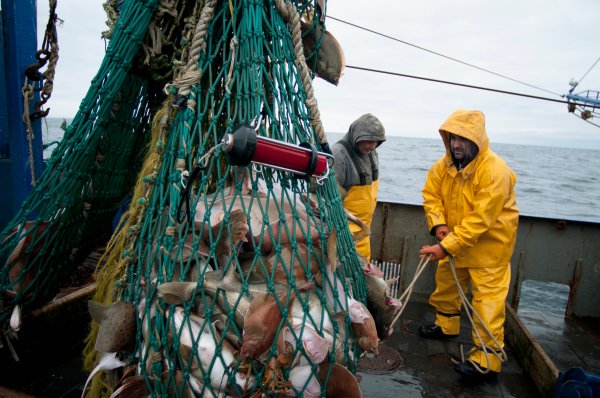 The Case Against Fish
Next Up: Editor's Pick