When ISIS leader Abu Bakr al-Baghdadi ascended to the pulpit of the Great Mosque of al-Nouri in the Iraqi city of Mosul on July 5, 2014, it marked the jihadist group’s arrival at the pinnacle of its power.

A few days earlier the militants had swept into Mosul, routing the Iraqi army and police from a city of more than a million people. Clad in black robes and speaking to an audience of men in the 12th century mosque, Baghdadi proclaimed the virtues of the Islamic “caliphate” declared by the group weeks earlier. “As for your mujahedeen brothers, Allah has bestowed upon them the grace of victory and conquest,” he said.

Nearly three years later, Iraqi forces battling ISIS have fought their way to within a kilometer of the mosque, in a sign of the group’s ongoing collapse. The capture of the mosque — where the idea of the “Islamic State” was given voice — could come within days. It promises to be an important and emotional milestone in the war against the militant group.

“This mosque is a symbol for ISIS. If we take it, it will be a defeat for the terrorists,” says Jafar Jawad Qadem, a sergeant in Iraq’s federal police, speaking over sporadic gunfire inside an abandoned building on the front.

To take the mosque, however, Iraq’s armed forces face a fraught battle through the winding streets of Mosul’s old city that could take weeks. They have surrounded the old city on three sides, leaving a corridor to allow fighters to flee back into the pocket of Mosul still occupied by ISIS. When TIME visited the front-line near the Mosul train station on Saturday, ISIS had deployed snipers in an attempt to cut supply lines to sections of territory it recently lost to the government troops.

ISIS leader Abu Bakr al-Baghdadi, seen in this video screengrab, at the mosque in Mosul in 2014.
Anadolu Agency/Getty Images

Ordered built in 1172 by the Turkic leader Nur al-Din Zangi [also transliterated Zinki], the mosque illustrates Mosul’s rich history. The ruler of both Mosul and Aleppo, Zangi waged wars on the Christian European crusaders who landed in the Middle East at the time. He also sought to establish the primacy of Sunni Islam over Shiism. Both legacies have made him a significant figure for modern-day jihadists, who frame their sectarian ideology in terms of long-ago battles against both crusaders and Shiites.

Today, the mosque’s distinctive leaning minaret is a symbol of Mosul, a landmark at the very heart of the city. The ancient brick minaret is known colloquially as as al-Habda or the hunchback, a moniker that has also been used to name political movements, news agencies, and other organizations in and around Mosul. UNESCO announced an initiative in 2012 to restore the minaret, but those plans had to be put on hold when ISIS seized the city in 2014.

When ISIS seized Mosul in June 2014, Baghdadi’s sermon in the grand mosque became an iconic moment of the jihadist group’s journey to unprecedented power. That summer, the organization carried out a lightning sweep across Iraq, overrunning a series of cities and routing the country’s national army. It was and is the largest territorial extent controlled by any jihadist movement, including vast sections of both Iraq and Syria. Weeks earlier, the organization declared a “caliphate” harkening back to the Islamic empires of old.

Now, its members appear ready to defend it to the bloody end. Iraqi troops on the front lines in the vicinity of Mosul’s old city believe the ISIS gunmen arrayed against them are some of the group’s most hardened fighters, who have little hope of escape. According to Iraqi soldiers and medics in the area, the ISIS forces include seasoned snipers. As a result, the fighting around the old city is both grinding and brutal.

“Last night we had three came to us dead and all of them had, I mean, I hate saying the word but impressive head shots. They weren’t lucky,” says Jonathan Reith, 39, an American volunteer medic at an Iraqi Counter Terrorism Services field hospital in west Mosul on Saturday. “These were clean head shots. It’s like the person took the time, lined up the shot.”

The dense, winding neighborhoods of the old city pose a special danger, not just to soldiers but to civilians who are often held as human shields by ISIS, and facing a relentless assault by Iraqi and U.S.-led coalition forces. “The main obstacle we’re facing is civilians. Every time we advance there are a lot of people inside. We can’t use our artillery. We can’t use mortars,” says Qadem the federal policeman. Another policeman in the building later chimes in, “The front line isn’t a front line.”

While the grand mosque is an icon of ISIS, some soldiers fighting in Mosul take a more practical view. For Wesam Kamel, another sergeant with the Federal Police, the mosque is an important symbol, but he sees more urgency to capture buildings with military utility. “The garage is more important,” he says, referring to another more prosaic building nearby.

The recapture of the great mosque will not signal the end of ISIS, and nor will it represent the liberation of Mosul. But it will strike a huge symbolic blow to the militant group as the long war to rid Iraq of them continues. 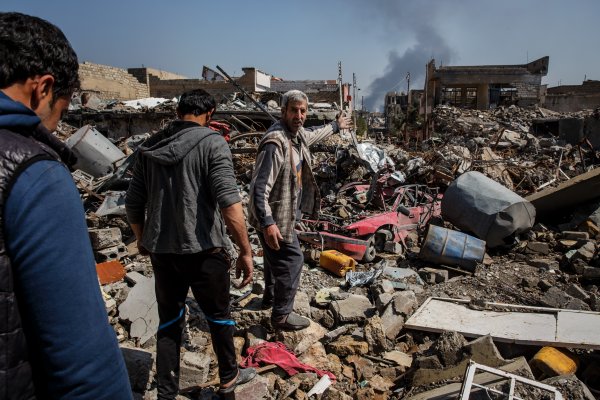 Civilian Deaths in War on ISIS Reach All-Time High
Next Up: Editor's Pick