April the Giraffe Just Gave Birth to Her Baby Calf

After weeks of anticipation, April the Giraffe has finally given birth to a baby calf.

The caretakers at Harpursville, N.Y.’s Animal Adventure Park, where April lives with her mate, Oliver, shared a Facebook live of the calf on Saturday morning shortly after its birth. They later announced the calf is a boy, but have not shared his name.

April began to give birth Saturday morning following weeks of internet speculation that began to come circle on April 1. The YouTube live feed intended to stream April’s pregnancy briefly went down, leading some conspiracy theorists to suspect the giraffe’s expectancy was an elaborate April Fool’s Joke. The rumors led Animal Adventure Park’s Facebook page to post on update that morning stating that it was “not a hoax!”

“All observations, behavior, and predictions suggest a calf today, tonight — we would be shocked to get through the weekend without our newest addition,” the park’s keepers said in a statement, adding: “This is what we have all been waiting for! … We will keep the world posted.”

Excitement for April’s baby had been escalating since February after someone reported April’s live stream as “sexually explicit” content with nudity. YouTube briefly removed it and the giraffe subsequently developed celebrity status once the video feed returned. But some people started to lose their patience.

Female giraffes typically gestate for 15 months on average. April was around 15 to 16 months pregnant, according to park officials, so she was slightly overdue.

Some social media users used the hashtag #AprilTheGiraffe to express their frustration with waiting. “I just spent 20 minutes watching a giraffe that’s been in labor for a month. Someone needs to stop me,” one Twitter user wrote.

But once the calf was born, viewers reveled in joy and excitement.

This is is April’s fourth calf, and father Oliver’s first. 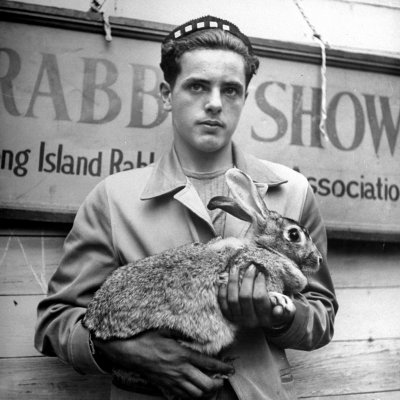 Unpublished Rabbit Photos From the LIFE Archives Put Bunnies in the Spotlight
Next Up: Editor's Pick