No, Michael Phelps Is Not Coming Out of Retirement (Yet)

Michael Phelps of the United States speaks during a press conference at the Main Press Centre on August 14, 2016, in Rio de Janeiro, Brazil.
Jamie Squire—Getty Images
By Olivia B. Waxman

Michael Phelps, the most decorated Olympian of all time, made waves Saturday after he tweeted that he is going to return to professional swimming and start training for the 2020 Summer Olympics in Tokyo.

But the hype around Phelps returning to the pool was short-lived. Team USA posted on Instagram that the announcement was part of an April Fools’ Day joke.

The prank tricked some people — especially after his teammate and former roommate at the 2016 Olympics Ryan Lochte challenged Phelps to a re-match at the 2020 games. Even teammate Katie Ledecky has said she doesn’t believe he’ll sit out the 2020 Summer Games.

TIME reported last summer that “before arriving in Rio, Phelps told reporters that this would be his ‘potential’ final Olympic appearance. ‘Just so you guys don’t beat me to death if I come back.'”

Phelps came out of “retirement” in April 2014, despite vowing that he would not continue swimming professionally in his 30s. At the 2016 Summer Olympics in Rio, the 31-year-old ended up winning five more gold medals and a silver, bringing his medal count up to to 23 Olympic titles and 28 medals. 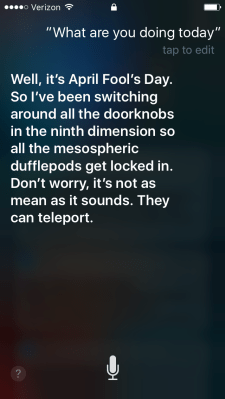 Siri Knows It's April Fools' Day
Next Up: Editor's Pick