HBO viewers eagerly tuned in for the Big Little Lies finale on Sunday night, desperate to find out who got killed and whodunnit. The abusive relationship between Celeste (Nicole Kidman) and Perry (Alexander Skarsgård) ultimately proved the catalyst for the murder, but not in the way viewers might have expected. TIME caught up with Kidman — who also produced the show, and whose performance has already been received as a high even in an Oscar-winning career — to discuss the final showdown and the importance of putting women’s stories on television.

TIME: I have to tell you, the finale made me cry a little bit.

Kidman: Yeah! I cried at the end of it. I called (director) Jean-Marc (Vallée) after I saw the end of it, and I went, ‘I’m crying!’ Standing on that beach at the end — it’s just so disturbing, and yet I just love how they’re protecting each other. That’s why I said to people, ‘Please see all seven hours,’ because how it starts and how it ends is so different.

I feel like if you only watched the first episode, you thought it was just stereotypes. You have to keep watching, because it’s about what’s underneath the stereotypes.

Yes, exactly. It’s very subversive in a way. It comes in and then starts dealing with all of the subject matter that’s taboo. Only watching the first episode you don’t actually get the tone.

Do you see this show as a triumph of female storytellers and characters?

For Reese [Witherspoon] and I, we were frustrated that we weren’t being offered the roles that had that complexity — that were actually the truth of how women are speaking and behaving in some of the storylines. This is a slice of life. It’s obviously not all women — it’s a particular group of women — but it’s still a very relevant, topical show. And we were frustrated that people weren’t giving us those roles. So the idea of being able to do it ourselves was kind of like, OK, then let’s do it! And that’s what feels amazing.

And you were the one who sealed the deal with the author of the book, Liane Moriarty, weren’t you?

My girlfriend, Bruna Papandrea, who was Reese’s producing partner when she had Pacific Standard — and I’ve known her since I was in my twenties, so we’re very close — she called me and said, ‘There’s this book, I just read it, I think this is the book.’ You know, we’d been looking for something to do together for ages. And she said, ‘Reese loves it — we’ve got to try to get the rights.’ She said to read it, and so I read it overnight, and then I said, ‘Well, I happen to be going to Australia tomorrow, do you want me to try to sit down with Liane and see if she’ll give us the rights?’ So I set out to have a coffee with her, and over coffee I just said, ‘Liane, if you give Reese and Bruna and Per (Saari) and I the rights, then I promise you we’ll get it made and we’ll do it the best way we can, and we’ll try to find the best place for it and we’ll protect it.’ And she trusted us.

Did you talk to her about this idea of women carving out that niche for themselves?

We didn’t, really, because it’s not about excluding men — obviously Jean-Marc directs it. It was more just, this is such an important time in terms of storytelling for women, because there’s nothing really out there. We were told this show won’t do well, that there’s not a show about women and their kids that’s going to reach a big audience. And we were like, what, really? We just didn’t believe them.

Why do you think so many people, especially women, have found this to be resonant?

So many people say to me, ‘I’m watching it with my partner.’ Friends of mine who are a gay couple go, ‘We’re going to be so depressed on Sunday nights, because we don’t have anything to watch now.’ They would race home, put their twins to bed, and get into bed, order pizza and watch the show. And I love that! So I think it ended up crossing over. I’m surprised that it’s penetrated to such a degree, because before I went into the whole thing, I didn’t quite realize how much there is in television. There are so many shows. And there are good shows. But there aren’t shows for women about women. And that’s kinda crazy.

I think that’s why they end up being successful, because people do crave those kinds of stories.

Liane will have to write another book for you.

Yeah, exactly! We were like, ‘Come on Liane, come up with something.’ And we’ve got ideas. The strangest thing is the way people are connected to each of the women, and a lot of those stories haven’t been explored, anyway. Even with the ending, the reason Bonnie pushes him, that hasn’t been explored. You know?

I hadn’t read the book, and after I watched the finale, I did read a little about the backstory with Bonnie. But I actually loved that the TV show doesn’t explain it, because you can tell there’s something there.

Yeah, the intuitive way in which she reacts too it, and she just goes [whoosh]! But you know that she’s sitting on things as well. We all are, of course — that’s life, isn’t it? Everyone’s life has got a lot to it.

How much do you think the domestic violence element makes people respond to the show so powerfully?

I don’t know — that’s more for other people to say. But people talk to me — I’ve never been on a TV show, so to be in people’s lives every week is a very, very different feeling for me, and I love it, because I feel very connected to people. I was flying back from Australia, and the show’s a huge hit in Australia, and everyone — the stewards, the passengers — were wanting to talk to me about the character. I’ve never had this reaction. I delve deep into the psychology of the parts I play, so I love to talk about it. But Celeste’s story is really emotional and sad, and also very honest, because of her denial and the way in which she’s willing to take so much blame for things and the way in which I can’t see what’s right in front of my face. Some of the saddest things for me is the wardrobe: I was like, ‘I’ve got to wear long sleeves all the time.’ Because I’ve got to cover my body. I go to yoga class and I have my body covered, long sleeves, even when I’m really hot. And then I become so skilled at covering bruises, which I did become. The makeup artist taught me how to do it, and I would do it on camera. [Perry] is obviously very clever because he bruises the body — he doesn’t really bruise the face. And it’s devastating. The biggest word for Celeste is “shame.” She’s so ashamed. And I think that’s a word that resonates anybody who’s in some sort of addictive, abusive relationship.

It is such a female-driven project, but as you say, the director and the writer were both men. What makes them good partners on this?

The reason we originally went to Jean-Marc first was because Reese and Bruna had worked with him on Wild, and he was perfect for it. He’s a very sensitive man and you see from his filmmaking and the things he’s chosen to make where he stands with women. There’s an enormous amount of tender love from him — it makes him cry. Which I think is a really good sign. He would cry on the set.

Wow. During which particular scenes?

Some of the abuse things. There were just certain scenes that would touch him. And David [E. Kelley], obviously, he’s a husband and he’s a father of a daughter — he has a son as well — but he has a huge sense of one, raising a female, and two, being the partner of a female. They’re men who love women.

In that final sequence, splicing back and forth between the beach and the crime, it feels like we’re flipping the narrative from a male-female story to this female friendship and survival narrative.

That was imperative. I know the people who reviewed it having not seen all seven, because when you see the final one, it’s such a validation of women protecting each other and what we will do for each other. It takes a village, so when you stand on the beach together, and there’s those children running around free, laughing, playing, and all of us standing there going, ‘OK, we have to move into the future together. We’ve all become complicit, but we’re protecting each other.’ I think you feel the genuine friendship, which is what we all developed. 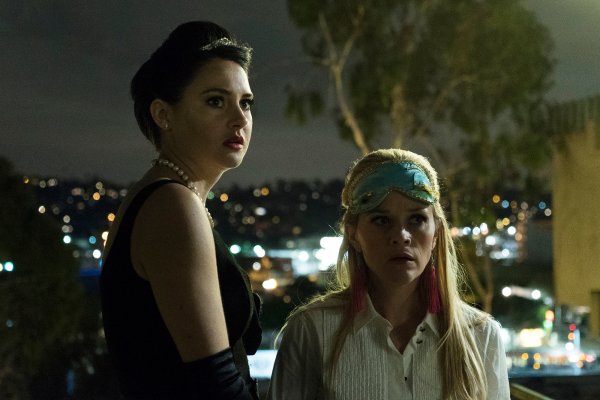 Big Little Lies Was Never Just About a Murder. The Finale Proved That
Next Up: Editor's Pick