For the uninitiated, Maria Grazia Chiuri is a fashion industry badass. She’s the first-ever female artistic director of the house of Dior and, in just four collections, has already managed to champion women while keeping it fabulous.

On Thursday, Dior introduced former Hunger Games star and red carpet beautyJennifer Lawrence as the face of the brand’s fall 2017 campaign. No news there, considering Lawrence has a years-long history with Dior, appearing in many, many major campaigns and also (who can forget this?) tripping on stage in a voluminous Dior gown before accepting her Best Actress award at the 2013 Oscars.

But this campaign stands far above the rest. For starters, badass Grazia Chiuri tapped French photographer Brigitte Lacombe to shoot the portfolio, a move that proves all things girl power are in at Dior. And though it’s not shocking that Lawrence glows for the camera, we haven’t seen her quite like this before.

Instead of the classically elegant ball gowns we’ve seen her sport in previous campaigns, the 26-year-old household name wears what we all love to wear: jeans and a tee. Yes, she sports a shirt and ballet flats colored with Grazia Chiuri’s new “J’Adior” logo, but she also rocks the “We Should All Be Feminists” shirt ($710; sasksfifthavenue.com), one we can all proudly stand behind. Additionally, she also carries updated versions of the classic Lady Dior bag, along with the C’Est Dior and the Dior Addict.

RELATED: No One on the Internet Can Handle Hillary Clinton in This Leather Jacket 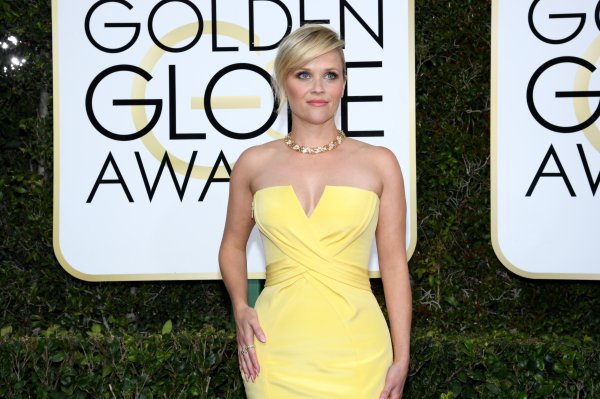 Reese Witherspoon Is Now a 'Storyteller' for a Major Beauty Brand
Next Up: Editor's Pick